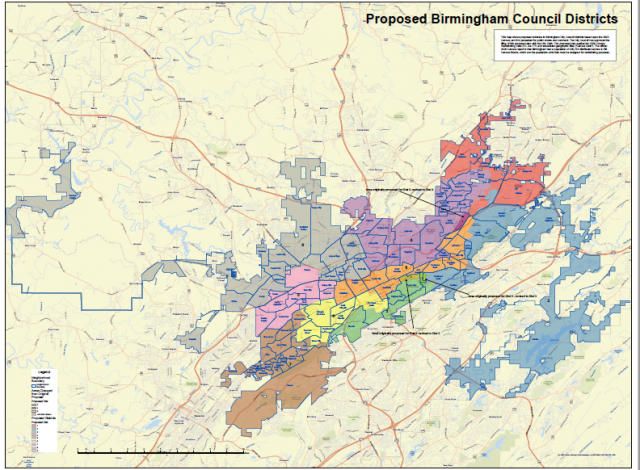 The new map was passed 7-2, with Councilors Valerie Abbott, District 3, and Darrell O’Quinn, District 5, voting no.

Every ten years, using U.S. Census data, municipalities across the country must redraw voting lines. The map presented at Tuesday’s public hearing is the result of a process that began in January.

Abbott said the redrawn map was a “travesty” and left her “angry and deeply disappointed.”

The Five Points South neighborhood, which has been shared by Districts 3, 5 and 6 since before the latest redistricting proposal, was Abbott’s biggest sticking point.

Though District 6, represented by Pro Tem Crystal Smitherman, had already reached into the neighborhood, the new map takes what Abbott has called “the heart” of District 3 and puts it in District 6.

“The reason we [drew the maps this way] might be because someone wanted the business district in Five Points South and a chunk of the residential neighborhood and Ramsay High School — and my church as an added bonus,” Abbott said.

In previous redistricting meetings, Smitherman said because of the low population in western Birmingham, she needed to go east for more population, and Five Points South made the most sense.

“This was not done out of malice,” Smitherman said after Tuesday’s meeting. “This was an honest, patient process … this is what federal law said we could do.”

Abbott also said, “My district didn’t need to be touched. It almost looks like there was some favoritism here, and that’s the problem. It’s the appearance that someone on the redistricting committee got preferential treatment because there was no reason [to do this],” Abbott said.

While all councilors were involved in the redistricting process, Council President Wardine Alexander, Smitherman and Councilor Hunter Williams, District 2, made up the Census 2020 Redistricting Committee.

Alexander took exception to Abbott’s comment. “Mrs. Abbott . . . I feel as if you have talked about the integrity of some of the members of the committee, of which I was a member, so I’d like for you to refrain from that,” Alexander said.

Smitherman also pointed out that the council was assisted by Dr. Kareen Crayton, a redistricting expert and lawyer, whose firm Crimcard Consulting Services and oversaw the council’s remapping process.

Crayton pushed back on O’Quinn’s suggestion that the council approve the map but delay when it goes into effect.

To delay implementation of the map could leave the city open to potential litigation, Crayton said. “The challenge is that the law requires for the districts to be equally populated,” he said. “So, if you don’t adopt a map that allows for compliance with that standard, you’re subject to a lawsuit” saying that the council is “intentionally not giving people access to an equally populated district.”

Councilor Carol Clarke said she didn’t think a delay was the answer because she couldn’t think of a time when redrawing the lines for City Council and the school board would not be “unsettling.”

“I’ve just sort of come to accept it as necessary to comport with the law,” she said, “…but I feel like it’s our job to comply with the law, and we’ve done the best that we can in terms of hiring capable guidance [Crayton]… For me, we might as well get on with it,” Clarke said.