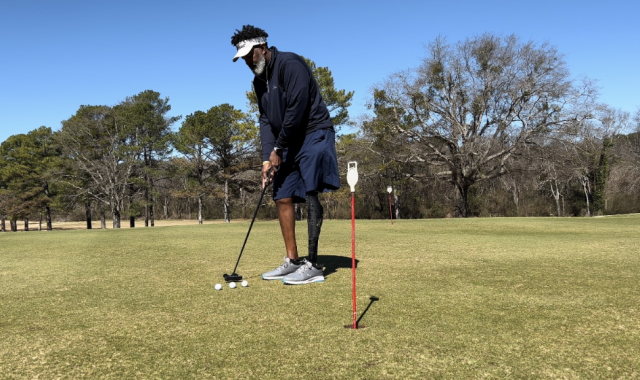 Chris Osborne, Birmingham resident and champion golfer, is headed to London next month to represent the United States in the inaugural Cairns Cup, a biennial golf tournament for players with disabilities.

Osborne, who lost his left leg in a 2004 hit-and-run motorcycle accident, was invited to represent Team USA at the tournament, which begins May 7. The Cairns Cup, disability golf’s premier match play event, brings together golfers with disabilities for “adaptive golf,” which accounts for the unique needs of the players. 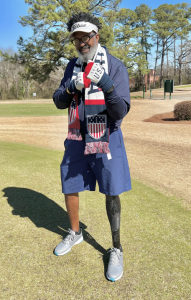 Osborne will represent the U.S., against Team Europe, alongside 15 other golfers from across the country. He is the only African American on Team USA after another Black golfer was invited to the tournament but couldn’t make the trip.

In the last five years, Osborne said he’s been encouraged by seeing more African Americans with disabilities come to events.

The importance of his trip to the Cairns Cup is not lost on him, Osborne said. It shows “what can be done.”

“[My teammates] are understanding of how monumental this is, for me personally, and for the people that I represent in terms of African Americans. My whole goal in playing adaptive golf, besides just enjoyment, is opening the doors for other people,” Osborne said.

Osborne, who grew up in Morristown, Tennesee before moving to Birmingham in 1996 to work as a photographer, and later, a reporter and anchor at WBMA-LP ABC 33/40 television said his father Willie P., who passed away in 2001, was the first person who introduced him to golf. The young Osborne would go out every Saturday morning with his dad and his father’s “church buddies.”

“[My father] didn’t pick it up until late in life, and he wasn’t able to teach me a whole lot,” Osborne said.

It wasn’t until after his leg amputation in 2004 that Osborne started to seriously play golf, he said.

“I was into so many other things [before the accident], riding motorcycles, playing basketball two or three times a week…so when I lost my leg, the competitive nature in me said, ‘You have to find something where you can still be competitive,’ so I decided to make golf that thing,” Osborne recalled.

Osborne is a former Paralong Drive World Record holder, with a distance of 332 yards, and has placed in the top three in adaptive golf tournaments in Atlanta and Chicago.

Even with his accomplishments and honors, Osborne said he also plays golf because he can do it with his whole family. Osborne often plays at the Roebuck Municipal Golf Course and around Birmingham with his wife Tiffany and his children, William Jr., 12, and Olivia, 11.

Osborne has also helped teach mentor golf alongside others with the Professional Women Golf Association Birmingham, which aims to promote golf for women. 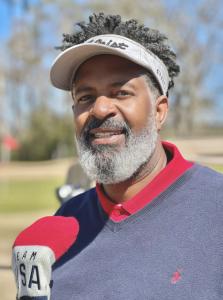 To prepare for the Cairns Cup, Osborne, who also serves as public relations manager for the Jefferson County Department of Health, said he has been practicing the “whole gamut” of his game, but particularly focusing on putting and chipping.

“On any given day, and I will spend a couple of hours hitting dozens, sometimes hundreds, of balls to make sure that I feel comfortable with that particular shot,” said Osborne.

One thing that Osborne can’t prepare for are wind and temperatures in a place like England.

Luckily, Osborne said around New Year’s Day, he was playing golf in Orlando, Florida with his wife when they happened to run into another Cairns player.

“He was playing behind us, so we waited on him, and I introduced myself and asked him about where he was from, and he said he’s from London. I said, ‘Oh, I’ll be over there in May,’ and his response was, ‘Oh, you must be playing in the Cairns Cup. [He said] I am, too,’” Osborne recalled.

Osborne had run into Team Europe player Mike Browne. Osborne said Browne was very helpful in talking about some of the differences when it comes to playing in London.

“I have prepared as much as I think I possibly can,” Osborne said.

To assist with Osborne’s trip to London for the Cairns Cup, visit https://www.gofundme.com/f/help-chris-osborne-team-usa-get-to-london.