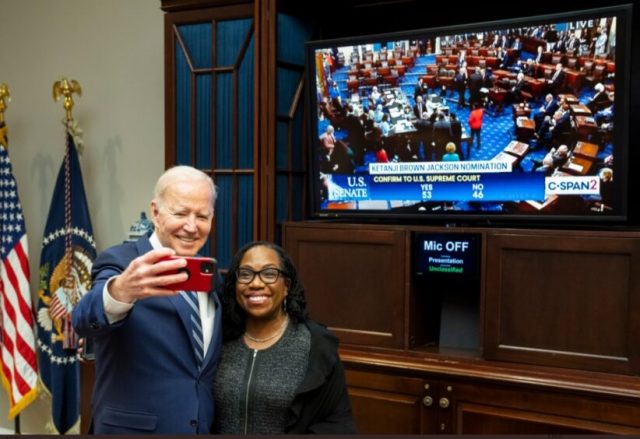 Judge Ketanji Brown Jackson is officially confirmed to the U.S. Supreme Court with a historical vote that makes her the first Black woman to ever serve on the highest Court. The vote comes nearly a month after President Joe Biden’s announcement of his Supreme Court nominee and following four days of lengthy confirmation hearings,

The vote was 53 to 47, limiting any debate on Jackson’s confirmation, with three Republicans — Senators Susan Collins, Lisa Murkowski and Mitt Romney — joining all Democrats in the evenly divided Senate.

“The judge belongs on the Supreme Court,” said Senate Majority Leader Chuck Schumer before the senators cast their official votes.

“By that I mean something very specific,” he continued. “In our nation’s history, we’ve had 150 individuals sitting on the Supreme Court; 108 have been white men, only four have been women, only two have been Black men. But Justice Ketanji Brown Jackson will be the first African American woman ever to hold the title of justice.”

“This is a great moment for Judge Jackson, but an even greater moment for America, as it moves toward a greater union,” Schumer said.

“Destined For The Moment”

Njeri Mathis Rutledge, a law professor at South Texas College of Law who graduated in 1996 from Harvard Law with Jackson, was overjoyed with the official vote.

“The moment that Vice President Kamala Harris says she was confirmed, I just burst out into tears,” Rutledge said. “I am so happy and relieved. It was ugly. The Republicans got in the mud and tried their best to attack her character and her integrity, and it still didn’t work.”

She goes on to compare Jackson’s personality and character to that of Kimberly Reese, a character on the 1990s sitcom “A Different World.”

“She was wonderful in law school,” Rutledge recalled. “She was clearly brilliant and hard working. But what I most remember and cherish about her was that she was a really nice person. She was supportive. And so she was destined for this moment.”

“She knows who she is as a Black woman. She’s hard working. She’s driven. She’s ambitious. She’s focused. She’s all of those wonderful things that we came to enjoy in her.”

The confirmation marks a major achievement for President Biden who pledged his commitment to appointing a Black woman as a justice at a South Carolina primary in February 2020. Jackson’s supporters have hailed this historic vote as a long overdue milestone that will bring forth diversity to the court and ultimately represent a diverse nation.

“The court is now more reflective of our nation and the breadth of our legal system — traits that strengthen the court as it presides over the most pressing legal questions of the day,” said Patrick Gaspard, president and CEO of the Center for American Progress.

Referencing the attacks Jackson endured during the confirmation process from Republican senators who tried to paint her as a radical liberal who’s soft crime, Thelma Thomas Daley, president of the National Council of Negro Woman, stated:

“We are inspired and reassured that justice does sometimes prevail. Not equity, but simple justice. Judge Jackson possessed every traditional attribute required of justices. Despite her experience, attitude and knowledge, she weathered a withering cross examination from the Q-ANON Insurrectionist branch of the conservative party. Judge Jackson has broken through a concrete ceiling of resistance to equal justice.”

Support From All Backgrounds

Jackson currently serves on the D.C.’s federal appellate court and will fill the upcoming vacancy of Justice Stephen Breyer, whom Jackson happened to clerk for.

Although her confirmation will not change the ideological balance of the court, her unique experiences and perspective will be a start for greater representation on the court as well as signify a major victory for Democrats.

Jackson will also be the first former public defender to serve as an associate justice. After representing defendants on appeal who did not have the means to pay for a lawyer, Jackson will bring a perspective that’s committed to taking public interest into account.

It is evident that Jackson has garnered support around the nation from Americans of all backgrounds. In fact, according to a Marquette Law School poll, two-thirds of Americans said they would vote to confirm Jackson and described her as “”very qualified”” to serve on the Supreme Court.

“Our joy and pride as Black women has deepened throughout this process as Judge Jackson displayed her character, integrity, deep knowledge, and respect for the Constitution. The American people recognize her talents as well. Polling shows strong public support for her nomination, exceeding support for the three justices nominated by former President Trump. Indeed her nomination has unified our country and the more Americans learned about her the more support for her has grown.”

Nyah Marshall is a reporter for HUNewsService.com.