Among the nearly 85 graduates being awarded their Juris Doctorate degrees from the Birmingham School of Law this month were Birmingham mother-daughter duo Daphne (mother) and Edriuna Davis.

“When my name was called at commencement, my smile, walk, pace and movement while receiving my law degree were intentional,” said Daphne. “I crossed the finish line, and my lesson was taught to my children—not to mention the exhilarating feeling of standing in wait on the steps watching my daughter receive her Juris Doctorate, as well, so we could walk to our seats together.”

Daphne, 52, and Edriuna, 26, both of whom graduated on May 15 in a ceremony held at the Bill Harris Arena, are believed to be the first mother-daughter duo to graduate at the same time from the Birmingham School of Law.

“I was super-excited to be able to experience this journey with my mother,” said Edriuna. “I don’t know of anyone else who went to law school and graduated with their mother.” 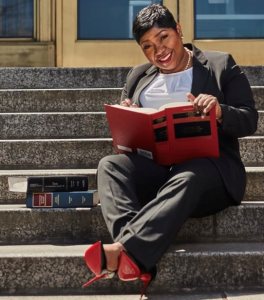 Daphne, who describes herself as a courageous, determined, and bold mother, said a divorce was the catalyst that propelled her to law school. After researching and preparing for her own divorce in 2009, Daphne was complimented by her attorney for being extremely thorough.

“My attorney told me I should think about law school and that [Miles Law School] would be glad to have me. I didn’t enroll immediately, but law school was spoken over me repeatedly,” she said.

With the support of her two children, Daphne applied to law school in 2017—the day before the deadline for admissions.

“Surprisingly, I was accepted, and we all did the happy dance. I was super-excited to become a law student,” she said.

Once enrolled, Daphne encountered several challenges. She was a bit apprehensive about some professors, sometimes intimidated by the workload, and often curious about how she was being perceived by her fellow classmates.

Nevertheless, she was able to connect with fellow students, attend study sessions, and become personable with a few of her professors. 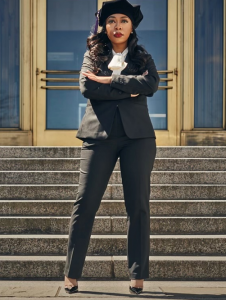 Edriuna’s interest in law began at the age of 11. Watching her mother become engrossed with researching and gathering evidence for her divorce case made Edriuna realize that she wanted to practice family law. Throughout her years in school—at Cathedral of the Cross, Irondale Middle School, and Shades Valley High School—she was a critical thinker and would often ask big-picture questions even if her siblings or classmates were less interested in knowing.

Edriuna earned a Bachelor of Science degree in political science from Tuskegee University in 2017. After graduating, she applied to law schools and received several acceptance letters. Her first choice was the Birmingham School of Law, where her mother had recently enrolled.

Once Edriuna was accepted, her mother immediately headed to a bookstore to purchase “matching book bags and shirts for the both of us,” said Daphne.

“I looked forward to seeing her in the evenings in class. I was able to spend a lot of time with her,” she added.

The mother-daughter duo never planned to attend law school together, according to Daphne. Edriuna’s dream was to attend Harvard Law School, in Cambridge, Massachusetts, but she began working for a judge in the Jefferson County Domestic Relations Circuit Court, and that changed the trajectory of her life.

Edriuna made the decision to stay in Alabama and attend law school with Daphne.

“I welcomed the change while smiling from ear to ear, anticipating our journey together,” the proud mother said.

Going through law school was a smooth ride for Edriuna until the summer semester of 2020, when she gave birth to her son, Denver Davis, and was diagnosed with postpartum cardiomyopathy, an uncommon form of heart failure that develops toward the end of pregnancy or within several months of giving birth. Some women recover only part of their heart function after six months or more, but some recover completely within two weeks.

“My heart was functioning around 20 percent, but by the grace of God I’m no longer in heart failure,” Edriuna said. “I’m doing much better.”

“I plan to work with my daughter and her husband in their law firm,” Daphne said. “I will also perform duties as a mediator and arbitrator as an advocate of dispute resolution. I plan to spend my pro bono hours giving back in the field of domestic relations because divorce was the catalyst for my Juris Doctorate.”