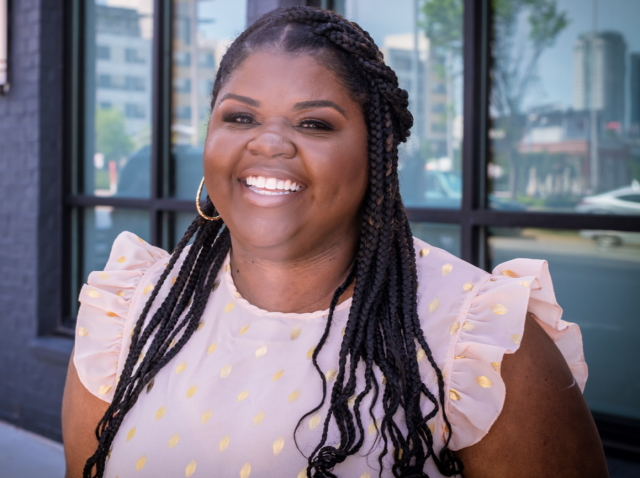 As director of operations with the Birmingham-based Addiction Prevention Coalition (APC), Nikeisha Macon can draw on her personal experiences while finding ways to help others.

Macon, 37, was raised on Birmingham’s West side on Pearson Avenue.

“I grew up with a mother and father in the home; it wasn’t a broken home to me,” she said. “My dad was a provider, an amazing dad. but he did struggle with substance-use disorder. His choice was alcohol. … Where we lived, I saw a lot of drug dealing and drug use. So, by the age of 13, I was seeing a lot of stuff I should not have at that age.

Macon tells the story of her eighth-grade graduation from Jones Valley Middle School.

“A way that my friends and I celebrated graduation was to try and find an adult that would get us some alcohol,” she recalled. “We found somebody, … and we ended up having beer for eighth-grade graduation.”

Macon would eventually “see her light” and leave alcohol behind. Her dad, however, continued his struggles and passed away from complications with his alcoholism in 2020.

“There was a lot going on at the time,” she said. “We were all in the beginnings of the [COVID-19] pandemic. I had just gotten married. … I was so confused, but I dropped down to my knees and prayed to God. While my dad was sick in the [intensive care unit (ICU)], I asked God for a sign of what I needed to pursue.”

Macon then knew that her “mission was to advocate and create resources for those struggling with addiction,” she said.

“When I had my interview with [APC’s] executive director, Carie Wimberly, I told her about her my experiences, and I just knew this is where I needed to be,” added Macon, who was appointed as the organization’s director of operations in January 2022.

APC is a nonprofit community resource that aims to eliminate addiction in Central Alabama. Through in-school prevention programs, educational events, and a collection of support services, APC aims to be a “convener of organizations united to prevent addiction and relapse.”

“We’re about awareness, prevention, and connection,” Macon said. “Our biggest goal is to reduce the stigma of getting help or treatment, so we offer scholarships for people who are looking to get into treatment by paying their entrance fees.”

Looking back, Macon remembers two significant moments that had an impact on her life. The first was her enrollment at West End Academy, from which she graduated in 2002.

“High school was just high school, but I needed something different to happen,” she said. “One day, one of my friends came to my house and said, ‘Hey, we’re about to go up the street to this charity called ‘Birmingham Works for You.’ [It was a program] through the United Way that was put in place to help us get jobs for the summer. [It] also helped pay for [prep courses for the ACT exam, a standardized test used for college admissions in the United States]. … That’s when I really started thinking about college.”

The second was when she took a job as file clerk with Motion Industries, an American distributor of industrial parts, while attending night classes at Lawson State Community College.

“I requested a meeting with human resources. The head of HR was William Scott, who served as my mentor for so long after this meeting,” Mason said. “He basically sat me down and said, ‘You have a lot of potential. You’re so smart, and you really genuinely care about people.”

Mason enrolled at Faulkner University in 2010 and graduated with a Bachelor of Science in human resources management, becoming the first in her grandmother’s lineage to graduate from college. From there, she worked at the Birmingham Civil Rights Institute (BCRI), where she met three inspirational Black women: Andrea Taylor, former BCRI CEO; Odessa Woolfolk, a renowned civic leader who helped establish the BCRI 1993; and Bobbie Knight, former BCRI chair and current president of Miles College.

“I went to an interview at the BCRI and met [Taylor], the director and CEO at the time,” Macon said. “I was like, ‘Oh my God, this lady is so smart and articulate.’ For [Woolfolk], I would do side jobs, such as typing if she needed me to. Until this day, [Woolfolk and I] check in with each other about every two months and just talk on the phone. I definitely have adopted her as one of my mentors.”

Macon left the BCRI in 2017 and took a position as operation manager for the Alabama Law Enforcement Credit Union.

In 2020, Macon wanted to get into the nonprofit sector and find ways to serve. “APC had an open position, and I knew it would be perfect for me,” she said. “God was telling me I needed to be here.”

One of APC’s biggest events is the End Addiction Bham walk, which is held annually in March to raise awareness and funds for individuals who need financial assistance to enter substance-use disorder (SUD) treatment, as well as to fund prevention programming in schools and communities.

“After our first walk, the response from the community has been immense,” Mason said. “Up to 4,000 people attend these events year after year. … As more community service providers joined us, it became one of the largest SUD resource events in the state. … Together we can stop substance addiction in Birmingham.”