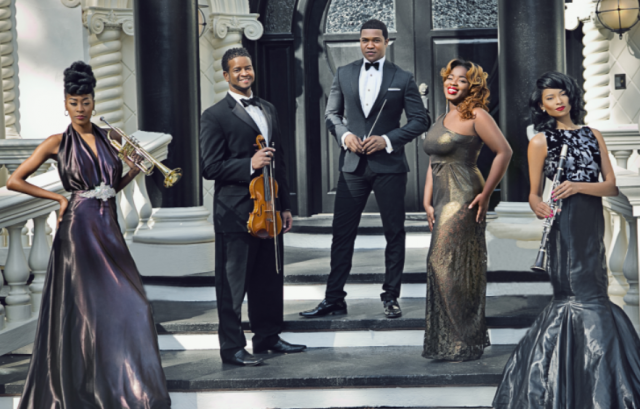 In six short years, the Atlanta, Georgia-based African American ensemble, Orchestra Noir has gained quite a following in both the Black and orchestral communities.

“We had a chance to go on [‘The Tonight Show Starring Jimmy Fallon’] with [Atlanta rapper] 2 Chainz, and I got a chance to write the music to one of [2 Chainz’s] songs,” said Jason Ikeem Rodgers, 39, CEO, founder, and music director of Orchestra Noir. “2 Chainz and his management team wanted to bring ATL to [Jimmy Fallon’s show], so they flew in Orchestra Noir, and that was awesome.”

The groundbreaking orchestra, with its first-of-its-kind musical act, makes its Birmingham debut with “The Best of Hip-Hop and R&B” concert at the Lyric Theatre on May 7 at 8 p.m. The ensemble will deliver its signature curated sound, which is a fusion of classical orchestra pieces combined with the familiarity of hip-hop anthems and R&B favorites.

As the popularity for Orchestra Noir grows, so does its collaborations.

“We got a chance to work with Red Bull, [a brand of energy drinks]. … They became one of our sponsors when we hit Atlanta,” Rodgers said. “Also, [we performed at rapper Cardi B’s ‘A Bronx Fairy-Tale’ baby shower in Atlanta in 2018], which was so awesome. … She’s so much fun, [and] I think she really appreciated having Orchestra Noir jam out at her baby shower.”

Rodgers, who is also known as “The Maestro,” added, “We just collaborated with the Charlotte Symphony Orchestra. This is the first big American symphony orchestra that we’ve worked with. We collaborated and did ‘Beethoven Meets ’90s Vibes.’ It was a really special thing, where I conducted Charlotte Symphony and I brought four Orchestra Noir members. It was a big, sold-out show.”

Orchestra Noir also had a heavy presence in the video for “Deadz,” a song by mega rap stars Migos and 2 Chainz.

“They liked our look and they wanted us to be in the video and do our thing. We were playing the song, but they really liked our brand. I think we were booked by the brand owners, [Quality Control Records]. I do know the Migos personally pressed the button on that,” Rodgers said.

Another event that stood out was “Night at the Symphony,” which took place in Atlanta in 2017.

“I met with [Grammy award-winning producer] Bryan-Michael Cox, and we went over to the [So So Def Recordings] studio and talked. It just made sense for us to put together ‘Night at the Symphony,’ and it was sold-out,” Rodgers said.

Asked to describe his role as maestro, Rodgers said, “It’s really a job about leadership. Musicians have to trust you. They have to know that you can lead them musically. Sometimes I have to be tough on them, I have to be a coach, … I have to choose music that fits the brand. I usually write [the music], but I leave room for input. Some people think you’re just up there waving your arms, but that’s just the final presentation of [the hard work].”