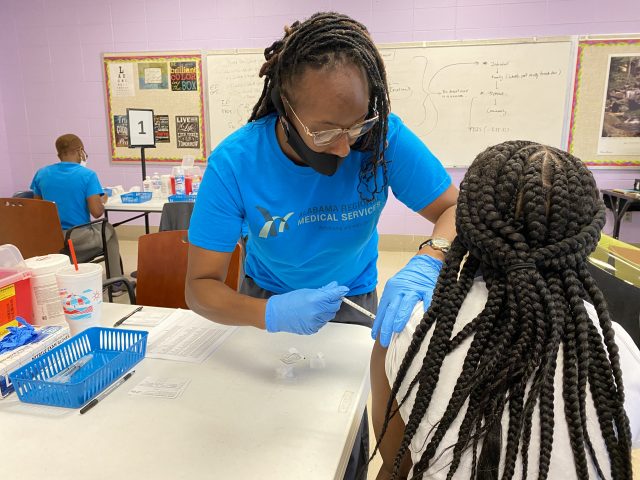 The award is given annually to schools throughout the country and recognizes exemplary work in all aspects of school public relations, communication, marketing and engagement.

Sherrel Wheeler Stewart, executive director of strategy and communications for BCS, who was instrumental in the winning campaign, credited the many partners who worked on the campaign.

In addition to BCS, the Jefferson County Department of Health (JCDH), the University of Alabama at Birmingham (UAB) School of Public Health, Alabama Regional Medical Services (ARMS) and Made to Save, a vaccine access initiative of national nonprofit Civic Nation, worked in conjunction.

During the height of the pandemic, BCS took a survey of parents of children in the school system and found 60 percent of the parents did not want their children to get the vaccine. Steward said there was much work to do.

“. . . we tried to raise awareness and to get as many people vaccinated as we could and to also encourage other protocols. If you’re not going to get vaccinated, can we also educate you on things such as social distancing, and hand washing, those kinds of things,” Stewart said.

That education came in the form of social media and radio pushes, knocking on doors, as well as getting people to rally around Doug Emhoff, second gentleman of the United States, when he visited Pierre Denson Jackson-Olin High School, where BCS and partners had set up one of numerous vaccination sites.

BCS also began hosting “COVID Conversations,” which were virtual and limited in-person sessions where students, parents and BCS employees could submit questions related to the pandemic that would be answered by medical experts.

Stewart said the efforts that BCS and the other partners were “very effective.”

“Anytime we can get someone vaccinated, we probably helped save a life, or we helped kids in schools. At the end of the day, that was our main goal, to keep our children and employees safe and to also maintain a regular flow of students,” Stewart said.

BCS Superintendent Mark Sullivan, Ed. D. agreed, saying the campaign was crucial to the school system’s success during the pandemic.

“The Our Best Shot initiative helped us achieve one of our main goals and that was to provide resources to help mitigate the spread of COVID-19 among our employees, students and families. We are pleased with this national recognition of our efforts,” said the superintendent.

The Golden Achievement award will be presented next month during the NSPRA’s national meeting in Chicago.