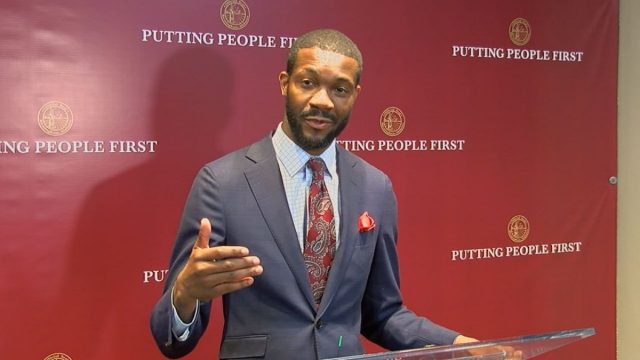 With less than 10 days remaining before the start of The World Games (TWG) 2022, Birmingham Mayor Randall Woodfin fired back at critics who said the city was planning to displace homeless residents during the Games which are being held from July 7 to 17.

“To make myself very clear, and to clarify all this misinformation that has been put out there the City of Birmingham, the World Games, Birmingham Police Department, or anyone else is [not] displacing or forcing or evicting or putting anyone out of any public spaces in our community,” Woodfin said during Tuesday’s City Council meeting, “. . . that is just simply not true.”

Community activist Erica “Starr” Robbins, founder of homeless support nonprofit Be a Blessing Birmingham, told the Birmingham Times last week that homeless residents are currently being pushed out of the places they live and contends nine encampments for homeless people were cleared out last month.

A city spokesman said last week those claims were false.

Also last week, representatives of the “Compassion Project,” said that “micro shelters” would not be in use for the TWG and were still in a prototyping phase. The plan to house services on site at Faith Chapel Care Center in the Smithfield neighborhood are still in effect.

The Compassion Project, made up of volunteers and advocates for the homeless, is overseeing the construction of at least 30 shelters at the Faith Chapel Care Center in the city for those who do not have a home,

Still, questions remained about services for the homeless during the games. Woodfin announced that the city will be making a cooling station available from July 7-17 at 421 Rev. Abraham Woods Blvd. from 6 p.m. to 6 a.m. At the cooling stations, residents will have sleeping cots, water and snacks.

He also applauded numerous organizations the city has worked with to address homelessness and said his administration has given $9 million to nonprofits working with homeless residents since 2017.

For the past 10 months, community organizations including Food for Our Journey, God’s Loving Hands Ministries, the Faith Chapel Care Center and the Alabama Center for Architecture, a nonprofit wing of the Alabama Institute of Architects, have worked to provide a hub of services for the homeless.

“I think we have to pause to appreciate those organizations for 90 percent of all the other work that they have been doing over the last few months to create the services that are usually here that will be in a safe space,” Woodfin said. “. . . I stand with them, and the city of Birmingham will continue to support them.”

The mayor acknowledged the city has assisted with “temporary housing” but in the future plans to support “transitional housing” for homeless residents.

Councilor Darrell O’Quinn urged nonprofits that assist the homeless to work with One Roof, the official continuum of care agency for Jefferson County.

“If you have an organization that wants to affect change in this space, please recognize that there is a network, there is a point of contact…that there are a lot of organizations that are working on this issue, and there are a lot of moving parts and a lot of projects or specific initiatives that need to be implemented to help address this issue and care for our neighbors experiencing homelessness,” O’Quinn said.