In early July, customers and employees walk into the Regions headquarters in downtown Birmingham and find themselves greeted warmly by a company executive. Clara Green, Executive Vice President, Head of Diversity and Inclusion at Regions Bank, has carved out time from her busy schedule and is in the lobby preparing for a media interview. That warm demeanor was the same during a recent hour-long conversation with The Birmingham Times. 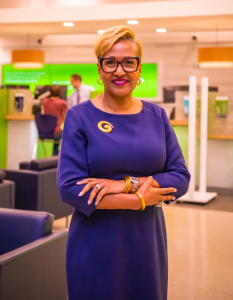 Coupled with Green’s warmth is an aura of business. Her corporate background includes two decades with General Electric (GE), where she served in a variety of human resources (HR) roles.

When Regions President and CEO John Turner wanted someone to build a strong culture and foster a sense of inclusion and belonging across all levels of the company, he knew a person with passion and purpose was needed. Green, who begins her fifth year with the company next week (August 6), was hired.

Green helped the company navigate the events of 2020, when protests erupted nationwide following the death of George Floyd at the hands of police in Minnesota. But Green’s leadership didn’t stop there. Since that time, she has been at the forefront of implementing diversity, equity, and inclusion (DEI) efforts at Regions, stressing how the work remains relevant and important to moving forward. Green may have best summed up where Regions is headed with a statement she put out previously.

“We believe a diverse and inclusive organization is better suited for meeting the needs of our communities, but it’s not only that,” she said. “We also believe it is fundamentally the right thing to do. People deserve a workplace that values them for who they are. We want our colleagues to know they are welcomed—and valued. … Our goal is not to see others through the narrow lens of labels or stereotypes. Rather, we see a greater value in taking the time to get to know each other—up close.”

Green is a creative, sincere, approachable wife and mother from Greensboro, North Carolina, where she was raised in a two-parent household alongside her older brother. Green’s father is deceased, but her mother is still living.

“She’s 91 years old with dementia. My brother and I share care, and she currently [lives] with me,” said Green.

Green and her brother would become the first in their family to attend and graduate from college. After graduating from Western Guilford High School in her hometown, Green attended the University of North Carolina at Chapel Hill (UNC), where she majored in Industrial Relations.

“At that time, it was part of the HR curriculum. They didn’t offer a formal HR degree,” said Green, who describes her time on campus as a great experience that taught her how to be independent.

“My brother was two years ahead of me, so he was there. In typical big-brother fashion, he ignored me, so I was on my own,” Green laughed.

Finding her own in a new environment allowed her to grow. During the spring of her sophomore year, she pledged Alpha Kappa Alpha Sorority, Inc.

“Between my sisters and the relationships I formed at school, they are still my best friends,” said Green, who is currently preparing her daughter, Alexandria, a high school senior, for college.

“I tell my daughter now, while we’re looking for schools, that she will know when she hits the campus. She will have a feeling of belonging,” said Green.

Despite Green’s older brother playfully ignoring her when she arrived at UNC, she found in him a mentor to prep her for success: Dr. Chuck Wallington, senior executive vice president of communications for Cone Health, a health care system in North Carolina.

“He really charted the course for me a little bit. Being able to follow his footsteps and being able to lean into him for additional knowledge was very helpful,” she said. 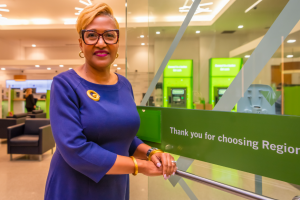 When Green graduated from college, she didn’t have her sights on corporate work: “I wanted to be a part of the fashion industry.”

She didn’t know it at the time, but her desire to pursue that occupation would help hone her skills for success in the banking industry. With fashion in mind, she took an assistant manager position at a retail store.

“Essentially, [working at the store] was the reckoning of the things I enjoyed, which were interacting with, talking to, and helping people,” she said. “I knew those were my strong suits, compared with jobs that don’t involve contact with people.”

Green soon realized that fashion really wasn’t her thing, but she loved the connections she had with the employees, as well as the responsibilities to coach, train, and develop associates.

Eventually, she made a career shift that proved to be a better fit, thanks to her family.

“That’s when my brother came into play. He brought things back into focus for me,” Green said, recalling a conversation they had about the direction she wanted to go with her career.

Her mother, who was working at a bank at the time, also offered some valuable guidance. She suggested that Green contact the HR person at a local bank, which led to Green being hired for a position through a staffing agency.

“That was the start of my HR career,” Green said. “Being able to step into that role proved to me that it was the right step because it was an opportunity for me to learn about HR from the front end of the process.”

Although the position was temporary, Green was able to understand the hiring process, place people in roles, deal with employee issues, and most importantly use the opportunity to grow as an HR professional.

Two years later, Green relocated to Atlanta, Georgia. Asked about the transition to Atlanta from Greensboro, Green said it was a drastic move: “I had two cousins and one girlfriend [there].”

Still, she believes it was the best decision she had ever made because being in a larger city afforded her more opportunities to develop personally and professionally. She eventually took a position with GE, where she spent two decades in various HR roles.

In 2018, Green received a call that gave her a spark. Elaine Jordan, a recruiter from Regions Bank, reached out about a role that would give Green a chance “to build something from scratch” as the bank’s first chief diversity officer. While going through the interview process Green met several individuals who worked with the company and researched the bank’s past. Since being in the position, Green has seen a positive shift within the company and noticed company-wide support.

Success can sometimes cause stress, so Green carves out time to decompress.

“I’m really trying to be present with my mom, present with my daughter, and present with my husband, [Abram Green], and my dog. So, in an odd way, that helps me decompress,” she said. “I have great girlfriends, too, and I get to travel and go to dinner with them. They are a critical part of my life and keep me grounded.”

In addition to taking trips with her friends, Green travels to the beaches at Destin and Gulf Shores with her family. In her spare time, she gives back through community service with her sorority and her church, Ben Hill United Methodist Church in Atlanta.

Green recently relinquished her office space and works remotely from her home in Atlanta, but she often commutes to Birmingham—a city she loves.

Initially, Green didn’t know what to expect in the Magic City because of its history. During her trips to Birmingham, she took time to visit several museums to better understand the history. She’s found Birmingham a great city to work and live in.

“You realize it’s a progressive city that’s working very hard to outpace it’s history, and there is a lot of progression,” Green said.

Asked about the passion that drives her, Green said, “Passion will sometimes sustain you when nothing else will.”

She gives an example of what has motivated her, an experience she didn’t fully understand when it happened.

“I was a junior in high school [in Greensboro, North Carolina], in the early 1980s. My high school was integrated on the front end of segregation. I had known most of the kids all of my educational life. During my freshman and sophomore years, I made the homecoming court. This was my school’s effort to include inclusion. During homecoming of my junior year, the top of the ballot listed white females in the class, and the students were told to select three. The bottom of the ballot listed Black girls, and students were told to select one. I was sitting beside a white classmate that I had known most of my educational career, somebody I thought I had a relationship with, and I happened to see his ballot. He followed the instructions at the top but a big, red X at the bottom.”

Green said she had a confused stare on her face: “I thought, ‘So I’m a big, red X?’ Not just me, but the people that look like me.”

She was 17 at the time and tried to process what had just happened. She said she had to sit with it for a little while because it didn’t make sense to her. She later talked to her parents, who weren’t caught off guard by the incident because that was their reality, and they said, “Welcome to the real world.”

Green has encountered similar situations throughout her life and career. They didn’t involve a “big, red X,” but they evoked similar emotions. She carried that experience until she had the opportunity to explore diversity and inclusion as an HR professional, and it became a silent passion.

“This is the seed that was planted in that 17-year-old spirit,” she said. “Being able to work as hard as I can every day to keep other people from experiencing that feeling is important to me.”