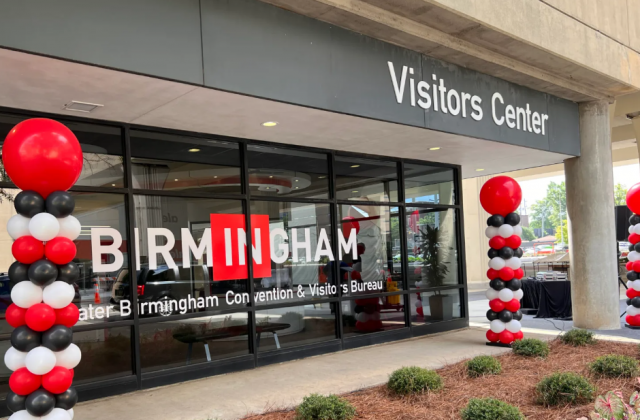 The Greater Birmingham Convention & Visitors Bureau this week opened a new visitors center at the heart of Birmingham’s new CityWalk.

The center has a contemporary design, with a video wall and informational brochures displayed by category such as culinary, outdoors, attractions, and more.  Also in the center is a kiosk with information in multiple languages for visitors to create their itineraries while in the area.

The visitors center, located at 2200 Ninth Avenue North, is in a portion of the former CVB offices.

“When the bridges started coming down for the new interstate, construction was perilously close to our offices,” J. John Oros, Jr., CVB president and CEO said, “so we moved across the street to the BJCC’s Forum building.  We always knew we wanted to keep part of our original space for a visitors center.  It’s an inviting gateway into the Uptown district.”

“Tourism is a strong economic driver for our area, and we want our visitors to have optimum travel experiences while they’re here,” Oros said.  “We expect the center to be a popular spot for travelers to The World Games, just days away now.”

The downtown center joins two other visitors centers operated by the CVB, one at Vulcan Park and Museum and one at the Birmingham-Shuttlesworth International Airport.  The new center is open Monday-Saturday from 10 a.m. to 6 p.m. and Sunday from 1 p.m. until 6 p.m.  Hours may vary during special events.