Alena Wicker may only be 13, but she’s been busy. A nominee for TIME’s Top Kid of the Year, the college student and founder of The Brown STEM Girl foundation just made history as the youngest Black person to be accepted into medical school.

The 13-year-old college junior has been accepted to UAB’s Heersink School of Medicine under its Burroughs Wellcome Scholars Early Assurance Program in May, the teen posted on social media.

Admitted to Arizona State University and Oakwood University at age 12, Wicker has already completed two and a half years’ worth of courses in just 12 months and has no intention of slowing down. Now the college junior is celebrating her early acceptance into the Heersink School of Medicine. 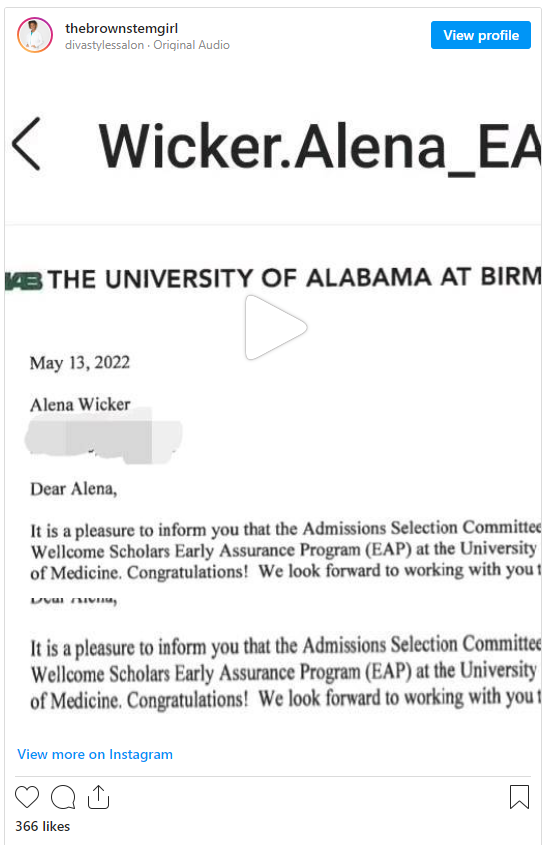 The future M.D. took to Instagram to share the news last week. “I graduated High school LAST YEAR at 12 years old and here I am one year later I’ve been accepted into Med School at 13. I’m a junior in college. Statistics would have said I never would have made it. A little black girl adopted from Fontana California. I’ve worked so hard to reach my goals and live my dreams,” she writes.

Wicker’s road hasn’t been easy. The teen takes two full course loads at both ASU and Oakwood University, attending virtually from Texas and flying in for lab courses.

Regarding her goals for the future, Wicker said, “I really want to leave my mark on the world and lead a group of girls who know what they can do.”

As if getting into med school wasn’t enough, Wicker has also been honored as a 2022 Global Child Prodigy of the World in Science Awardee. “Thanking God for every open door and for allowing my gifts to make room for me,” the young genius says. “I make STEM look dope.”

The teen has dreams of becoming a viral immunologist, a doctor who studies viruses. Wicker says that her interest came from engaging with the world through her passion for volunteering.

Above all else, Wicker wants other girls of color to know they can do anything, especially as it relates to STEM. “I want to inspire girls. I want them to see that there are no limits.”