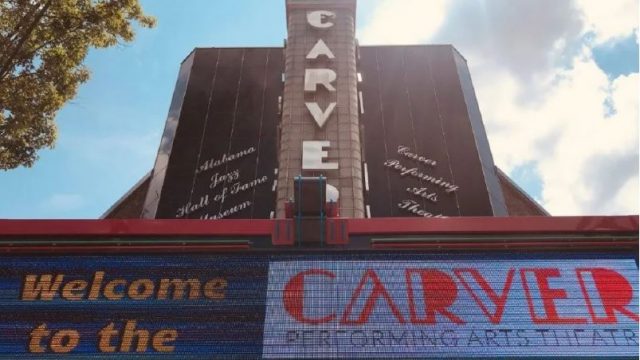 After more than three years of painstaking renovation and restoration, Birmingham’s historic Carver Theatre is ready to greet visitors once again as one of the viewing sites for this year’s Sidewalk Film Festival, which kicks off Aug. 22 and runs through Aug. 28. The soft opening provides a preview to a grand opening to be scheduled later for the Alabama Jazz Hall of Fame and the Birmingham Black Radio Museum, which are both housed at the revitalized venue.

Originally a movie house when it opened in 1935, the Carver Theatre was a center for nightlife in segregated Birmingham’s Black Business District. The theater closed in the early 1980s but was purchased by the city of Birmingham in 1990. The Jazz Hall of Fame took over operations of the theater in 1993.

Among the many supporters of the Alabama Jazz Hall of Fame and the Birmingham Black Radio Museum is the Alabama Power Foundation.

The theater is also home to FM 91.1, Jazz Hall Radio, which broadcasts the full spectrum of jazz, commercial-free, for Birmingham-area listeners and worldwide via the internet. The station’s new studio is located in the basement of the theater.

Meanwhile, happening this month on the street in front of the theater is the Taste of 4th Avenue Jazz Festival, which is back after a hiatus during the COVID-19 pandemic. The jazz festival, which was created by the Jazz Hall of Fame in 2003, is slated for Aug. 27.

Check out the video below to go inside the new Carver Theatre. To learn more about the just-completed renovation and the history of the Carver, click here.