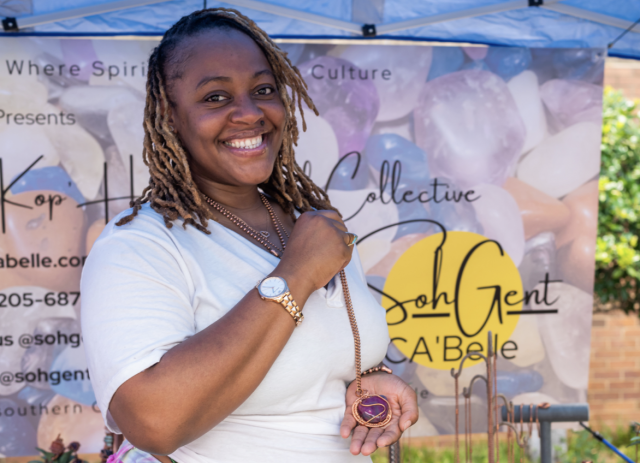 When a friend encouraged her to purchase some gemstones at a retail store in Birmingham and wrap the stone in copper to sell, Erneshya Ray didn’t know that would be the start of a business.

“She showed me a lot of pictures and they looked cute and I asked her, if I sell this stuff, would you buy them?” said Ray. Her friend said she would.

She began the business in 2020 after purchasing copper and tools from area stores and watching YouTube videos to study ways to make her jewelry look appealing.

Ray said she was familiar with birthstones. “I didn’t know there were other gemstones,” she said.

She took photos of her hand wrapped jewelry and posted them on Facebook and Instagram and immediately people started buying from as far away as California, where she is from.

With her customer base growing Ray filed for an LLC and business licenses in Alabama and Jefferson County. That was the start of SohGent CA’Belle, meaning a Southern Gentlemen meets a California Belle. “I believe in a higher power and I believe crystals are from the earth,” Ray said.

Her first pop up event was in May 2021 in Bessemer. Ray said she was nervous but made a few sales. She flew home to California for a few weeks and did another popup event where she worked from noon until 6 p.m. and made $1,000.

That’s when Ray learned she could make anklets and bracelets out of the copper she was using to wrap the gemstones.

Ray said she created pieces that everybody can wear and it can be spiritual or fashion. Her jewelry is cleaned under rain water and charged under moon light. During popup shops anklets are her best seller. On her website her best seller is Green Aventurine or Amethyest.

Ray is currently planning to have her jewelry available for purchase soon in Golden Temple, a health food store on Birmingham’s Southside.

“There are some people that believe in metaphysical. I simply want a jewelry store that provides a fashionable way for people that subscribe to crystals to wear them as well as copper,” she said.

For years, Ray has studied astrology as a hobby. She has always been interested in people and how their characteristics correlated with the moon. Overtime she developed an obsession for birth stones. She looked down at her hand and said, “This was the first gemstone I’ve ever had. This was my grandmother’s and this is our birthstone. This is a periodot.”

Ray’s grandmother’s birthday is August 29 and Ray’s in on the 30th. In high school her grandmother gave her a periodot ring for graduation and she’s been wearing it ever since. Over the years Ray has learned her entire family birthstones and she would gift them birthstones jewelry for their birthdays.

“I would always buy a bunch of stones just because,” said Ray, born and raised in Compton, CA in two single parent households. “My parents have never been married but they are the best of friends.”

For 16 years, Ray was the only child until her mother had her brother, Edrick Mitchell. Although Ray was the middle child because her father had more children she said she was his favorite.

“I know for certain I’m my dad’s favorite. He says it and I tell him he can’t say that. I’m Erneshya and my dad name is Ernest Morrison. Out of all of his daughters I’m the only one that has his name,” said Ray.

Growing up in Compton, CA she can remember the violence, shootings, and gang related activities which she thought were normal until her mother moved the family to Downey, CA about 20 minutes away, a predominantly white neighborhood.

Ray said she was surprised by what she found in her new environment.

After graduating high school in 2002 she attended American Intercontinental University for fashion design and marketing in California. “I’m super artistic and super creative. In high school I designed clothes for friends. I would cut up old clothes, glue them, safety pen them together stay, tie them however I could make them stay together.”

Between 2007 until 2010 she worked jobs through staffing agencies. Most of her jobs consisted of call centers with cell phone companies to stay afloat as a single mother of a then 3-year-old.

She began to struggle, had her car repossessed and fell behind on her rent. “Losing things, you work so hard for and not knowing how to recover was hard,” she said.

Ray became depressed and explained to her therapist most days she didn’t want to get out of bed, she didn’t want to live, she just didn’t know what to do she was working and couldn’t get ahead. “She told me I need to change my environment and I agreed,” said Ray.

Ray remembers calling her best friend Amelia Gulley who lived in Birmingham. “I call Amelia and said, ‘hey can I move there? I promise I’ll go to church every day and I won’t go to clubs I promise I’ll change my life.’ She told me I needed to call her mom because she had a room with two beds. ‘One for you and one for [her son] Cadence,’” recalled Ray.

Ray and Cadence moved in with Michelle Mitchell, who was living in Pratt City, and Mitchell would minister Ray, who only remembered going to church in California and on Easter Sunday and Mother’s Day. She only knew two gospel songs “Stomp” and “Rain Down on Me” by Kirk Franklin.

When she arrived in Birmingham on Nov. 1, 2013 “I had on five-dollar flip flops and an Old Navy hoodie. In California it was 84 degrees when we got here it was 19 degrees. I had never experience anything under 59 degrees. I immediately thought I made a terrible decision.”

Less than a week after their arriving Ray experienced her first tornado. “Nobody told me the natural disasters here in Alabama were tornadoes. I was raised in California with earthquakes. I was used to getting under a table holding on to the legs and you just wait until it’s over.”

Ray wondered how she could survive a tornado and she was advised to get in a tub with a helmet and hold a mattress over her. After receiving that advice she called home to her grandmother and told her she made a mistake and needed to come back home. Her grandmother told her she would be fine.

However, Ray stayed in Birmingham long enough for Thanksgiving holiday and expected to experience some good southern holiday food. “My first time cooking for Thanksgiving was the year I came to Birmingham. Ms. Mitchell did not cook. She told me if I wanted to eat, I had to cook myself,” Ray recalled.

Ray found herself dialing back home again for over the phone cooking lessons from her mother and grandmother and they told her how to make macaroni and cheese, dressing and a turkey. She attempted chitterling but the smell was so bad she put them in the trash. “I cooked my whole first Thanksgiving by myself,” said Ray.

After her early struggles she found she has a lot to be grateful for. She and Cadence got baptized Dec. 7, 2014. Ray said she was spending so much time at The Rock Church in Forestdale members thought she was dating someone there.

“I wasn’t dating anyone, just felt safe there I felt comfortable there wasn’t any drinking and partying, it was just church. Going to church was more fun than the club to me,” said Ray.

In 2017, she met current husband Rod’Shean Ray at a mutual friend’s house. “I had on a Compton t-shirt and he walked up to me and asked if I was from Birmingham. I looked at my shirt and said, ‘ummm no,’” Ray said.