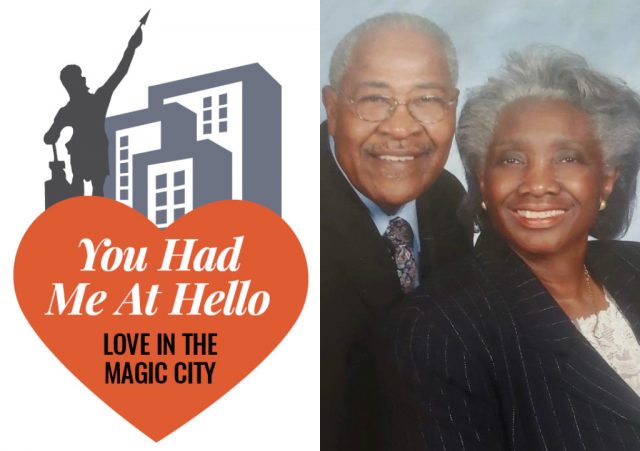 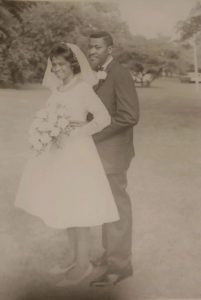 Met: December 1957, in Ensley. William was headed to a skating rink at 12th Place Ensley when he ran into Cherry and her cousin Sophia. “We met and at the time that was it, I kept on [heading] to the skating ring. But the next day [at Sophia’s mother’s house in Ensley], I went by to meet Cherry again and ask for a date,” William said.

“I thought William was a nice guy, but we lived a long ways apart [Cherry lived in Sardis, Ala., which was two hours away]. We went to McAlpine Park [Ensley] and walked and talked [during that visit],” Cherry recalled.

Things didn’t get serious between the two because “after I graduated [Shiloh High School, Sardis, Ala.] in May [1958], I left home with three of my girlfriends, and we rode the bus from Selma to New York City. We were invited by two of our teachers to come work with them for the summer doing nanny jobs,” Cherry said. “Right after I moved to New York, William asked Sophia about me, and I told her she could give him my address and we began corresponding through letters. And when I came home on vacation, I would always go see my cousins and stay in Ensley with them, and that’s how [William and I] would see each other.”

First date: Summer 1959, at the 401 Club in Powderly. The two went dancing after William’s family cookout at his mother’s house in Ensley.

“I was very comfortable, and I’m almost sure that she was too because my family was known for their hospitality,” William said, “It wasn’t all that lovey-dovey or anything, I was playing bid whist [a card game] with the guys and she was socializing with the girls.”

“There was still a lot of family around, some of his family went and some of my cousins [went dancing with us], and we all went in together. He and his brothers liked to be together, they’d be in three or four cars, he had eight [siblings],” Cherry said.

“I would love to say there were fireworks that date, but it had to evolve… We had a long-distance relationship, I would only see her when she was on vacation, the rest of our courting was done by telephone and through letters,” he said.

“Marriage hadn’t come up, I know that much,” Cherry laughed, “but he was the only person I was dating.”

The proposal: July 1962. “I missed her so much I sent her an engagement ring through the mail,” William said. “I hadn’t talked to her for about four or five weeks and I didn’t realize how much our nightly conversation meant until I wasn’t doing it anymore.”

“He sent the ring with a long note, he had a lot of apologizing on there, he was putting up his excuses for the reason he hadn’t been writing, saying he was so busy and carrying on. I was shocked… I called and left him a message and he called me back and from then on we were engaged,” Cherry said. “I kept the ring around a while before showing or telling anybody, but it wasn’t until Christmas time when I made an announcement at my church [in New York] that I was engaged. At that time we weren’t sure if I was moving [to Birmingham] or if he was coming to New York, but then he called me and told me he was coming to me and I got excited. One of the deacons in my church worked [for Trailways] and he said soon as he gets here call me… he held a job for him.”

The wedding: In Belville New Jersey at Second Baptist Church, officiated by Reverend Alton Brown. Their colors were black and white. Cherry’s mother came up from Sardis, Ala. for the wedding.

Most memorable for the bride was seeing her wedding come together with the help of her friends. “There were a lot of things that I didn’t have a hand in that my friends took care of [the reception, decor, etc. and it was a surprise to me. We didn’t own a car, and we didn’t rent one, but my friend let us use his Cadillacs and we got to drive one. And an older friend I called Uncle George, he stood in for my father and gave me away, he had on a tuxedo and we didn’t rent any. It was just beautiful, everybody stood in for our family and [gave us a beautiful wedding],” Cherry said.

“We went to New Jersey thinking we’d have a small yard wedding, and it turned into a gala affair,” William added.

Most memorable for the groom was how much he “enjoyed taking pictures in the park. I still take my wedding album out now and look at the pictures.”

Words of wisdom: “We are a team, and that’s the way it’s been all throughout our marriage. Every major thing we did and decision we made we did it together. Even working in the church. We’ve always been known for our hospitality. We prepare meals together, and when we were raising our kids we didn’t want to have a babysitter any more than necessary, so I made the sacrifice and worked nights so I could be home during the day while she worked… We don’t carry a grudge, we say what we have to say and settle it right then and don’t bring it back up. It’s been a good journey for me,” William said.

“Cooperation and working together is the most important thing there is. If you’re striving to get somewhere and somebody is pulling the other way it just can’t work,” Cherry said. “Don’t do a lot of bickering and keep good company. We went to church a lot, we were in [small groups], and we’ve had a good time [through the years].

Happily ever after: The Weeks’ have two children, Felecia, and Jeffrey Weeks, four grandchildren and one great-grandchild. They relocated from Bronx, New York to South Roebuck in 2002 after retiring from their respective jobs and attend New Hope Baptist Church in West End.

“From the beginning of our marriage, our dream was to retire and relocate back to Birmingham, and the only way we could do that was to work together. We stuck with the budget, and if we got a little extra, we put it away and we didn’t go back looking for it. If it was in the savings, it stayed in the savings. Make a goal and work towards it,” William said.

Cherry, 83, is a Sardis, Ala. native, and Shiloh High School grad [Sardis, Ala.] She retired from her position as an assistant manager from New York and Company in Bronx, New York in 2002.

William, 82, is an Ensley native, and Western Olin [now Jackson Olin] High School grad. He retired from his position as a purchasing agent from Greyhound Bus Lines in New York, New York in 2002.