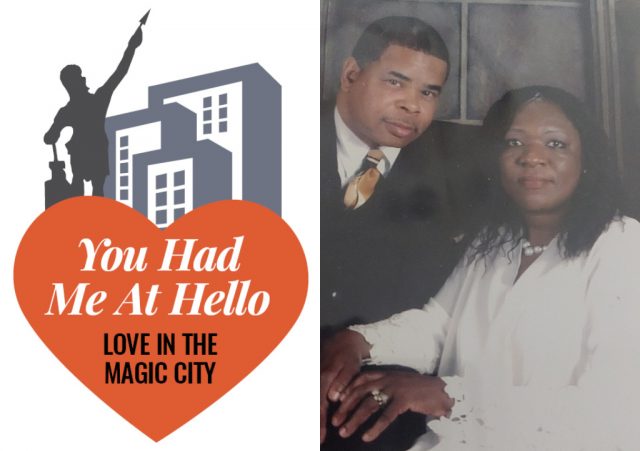 Met: Spring 1971 when Earnestine and her family relocated to Birmingham and moved into Paul’s neighborhood in Pratt City. That fall, the two attended Jackson Olin High School where they began their freshman and senior years, respectively.

“When we became neighbors, her brothers and cousins all lived together and we all became close friends, her brothers introduced me to her… Earnestine was always busy with sports, she was very athletic, she ran track and played softball as well, and the only way to spend time with her in the evenings was to walk her home from practices…I used to go so I could carry her books home, Paul said.

During the summer, her mother and grandmother would invite me down to eat dinner with them on Sunday evenings, and whenever me and her brothers were in the backyard talking under the tree, Earnestine would come out of the house and the next thing I know she would climb the tree,” Paul laughed. “She would sit up high and we would be down low and she would yell down [parts of the book] she was reading.”

“I was always in that tree and…I was always watching him,” Earnestine laughed. “He had a hold on me, he just didn’t know it. I tried to play hard to get, but he was different from the other guys, he was polite, he was kind of shy, he didn’t move fast like the other boys,” she said.

“We came home after we got through eating and sat on the front porch just talking until 4 a.m. We always used to sit on that porch, even in the wintertime, we’d just have blankets and people used to come and join us,” Paul said.

“My brother, Wade, and I were real close . . . and he was always with me that’s the reason my mother didn’t worry about me,” Earnestine said.

“But her mother trusted me,” Paul added.

The turn: In 1974 when Earnestine finished high school. “I used to ride the bus to school [Alverson Draughon Business College, in Birmingham] and Paul and his dog would always be at the bus stop waiting for me. It would be late evenings, and he never missed a day, he was always there,” Earnestine recalled.

“I was very popular in high school, and during that time I was talking to other women, but I realized they didn’t have the right mind, they were always trying to get something but never willing to give, and I realized that Earnestine was that woman that God gave me… and I always wanted to do what was right,” Paul said.

“We walked down from her house to mine, and it was time to walk her back home, and when we walked out onto my front porch I sat her down and told her I had something I wanted to ask her, and she said ‘what ya got?’, and I said ‘will you marry me?’, and she was surprised, and then said ‘I second that emotion’, she was a Smokey Robinson fan. I didn’t have a ring, [the proposal] was on a Saturday, but on that Monday I went and got the ring that morning,” Paul said.

“I was shocked because marriage was nowhere on my mind, I was just used to being friends, and when I got home I found out that he had already asked my mom. She knew before I did and she was more excited than me. And when I got in the house everybody was there laughing because they already knew too,” Earnestine said. “But I did say ‘yes’, and my mother did the rest. I didn’t plan anything, my mother, sisters, and Paul did the whole thing. Paul picked the colors and the wedding cake.”

The wedding: A double wedding at Tabernacle Baptist Church in Smithfield, officiated by Reverend Essell Davis, and their colors were powder blue and pink. Earnestine and her first cousin, John Hill, were the first of the cousins to get married so their family threw them a double wedding.

Paul and Earnestine and the other couple stood at the altar and took their vows together. “His mother and my mother were sisters, and everybody came to Birmingham [from Detroit] for the big double wedding,” Earnestine said. “John’s bride walked down one aisle, and I walked down the other, I had never seen so many people in my life.”

“I was a baker, I made the bride’s cakes and the groom’s cakes for both weddings,” Paul added.

Most memorable for the bride was forgetting “I was getting married that day,” Earnestine said. “I played softball at UAB and I had a game that morning, and all three of my bridesmaids and I played on the team together, and after the game we went back to [one of the bridesmaid’s apartment] and were just sitting there relaxing, and her husband came out and said ‘Earnestine, ain’t you supposed to be getting married today’ and we jumped up and scattered,” she laughed. “We weren’t too far from my mom’s house, they put me together in good timing. They [her mom and sisters] pressed that hair out and got it together, but my wedding did start 45 minutes late.”

Most memorable for the groom was his anxiety. “I was so nervous, and my aunt said, ‘Paul you look nervous (I was sweating bad), and she gave me a shot of bourbon whiskey, and said ‘here, drink this straight’, and I did. I was fine until I got to the church and started seeing her coming down the aisle, and I really started sweating then,” Paul laughed.

Words of wisdom: “When we face moments of hurt or pain we go to the scriptures. We try not to focus on what we did wrong, we just listen for God and ask him for guidance,” Earnestine said.

“Marriage made us not take life for granted. Being married, we learned to appreciate each other and stay truthful and work together for the goodness of God,” Paul said, “and by the grace of God, He’s shown favor on the both of us.”

Happily ever after: The Mumfords have two sons, Paul Jr., and Patrick Mumford, and 6 grandchildren.

Earnestine, 65, is a Tuscaloosa native, and Jackson Olin High School grad. She attended Alverson Draughon Business College [Birmingham] where she earned an associate’s degree in secretarial science and the University of Alabama at Birmingham [UAB] where she majored in business and played on the softball team. Earnestine works for Alabama Power where she serves as an administrative assistant in the department of engineering.

Paul, 68, is a Pratt City native, and Jackson Olin High School grad. He worked for Carraway Hospital where he was a cafeteria supervisor for 30 years before retiring from UAB Hospital’s food service department where he ran the food court for 10.