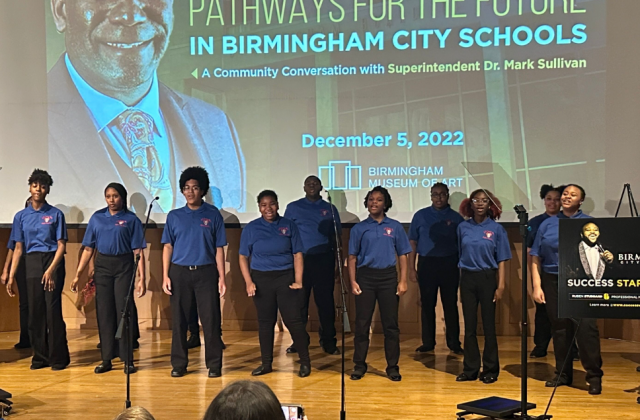 Even with a number of recent academic successes in Birmingham City Schools (BCS), Superintendent Mark Sullivan, Ed.D said Monday his team is “not sitting back…[but] standing up and facing the challenges, slowly but surely [and] overcoming them.”

Sullivan, joined by school representatives, other city leaders and residents gathered at the Birmingham Museum of Art to outline “Pathways For The Future” and tout academic improvements systemwide.

The celebratory event came on the heels of the release of the Alabama State Department of Education’s (ALSDE) annual report card of individual school systems where BCS received a 73, or a C, up two points from the pre-pandemic 71 for the 2018-2019 school year.

Among elementary schools in the system, larger gains were achieved, said the superintendent during his “community conversation.”

“Over the past year, our elementary schools have shown great progress. They’ve moved, a few years ago, from an F on the report card, to the most recent report card coming out–the most recent data shows that they’ve received a B,” he said.

While touting the school system’s successes, Sullivan also once again stressed the need for BCS to continue improving. While seven schools were removed from the “failing schools” list, 13 remain systemwide, he said.

But he outlined a number of initiatives to deal with the challenges pointing to the Board of Education’s (BOE) recently passed $506-plus million budget which includes pay schedules that are more competitive with other school districts, six new school psychologists and more classes for pre-kindergarten children in the city, according to birminghamwatch.org.

The seven pre-K classes will operate out of the former North Roebuck Elementary School, starting next year, Sullivan said, and each of the National Institute for Educational Research standards has been met, giving the classes a “100% First Class designation.”

“This is important because we know that our investment in early learning makes the difference in the long-term success of our students,” Sullivan said.

Sullivan also pointed to investments in math instruction as examples of the school system’s steps to improve and instructors like Reggie White, a math and science teacher from Booker T. Washington K-8 who was named Alabama Teacher of the Year for 2022-2023.

Sullivan also emphasized that BCS students are being given multiple “pathways to the future” and pointed to two stories from the various career academies that operate at each BCS high school.

One from the George Washington Carver Academy of Engineering, where a team of students recently won the Altec Innovation Challenge, earning them $10,000 to implement an app they designed called Nexism.

The app is intended to bring students together based on common interests, potentially keeping them out of less healthy recreation, students on the team said in a video shown at the event.

Sullivan also pointed to Huffman High School, where students in the Academy of Architecture and Construction have been building tiny homes, at least one of which has gone to a family in North Carolina.

Those in attendance Monday night included the Birmingham Board of Education, City Councilors Carol Clarke and Darrell O’Quinn and other area leaders.