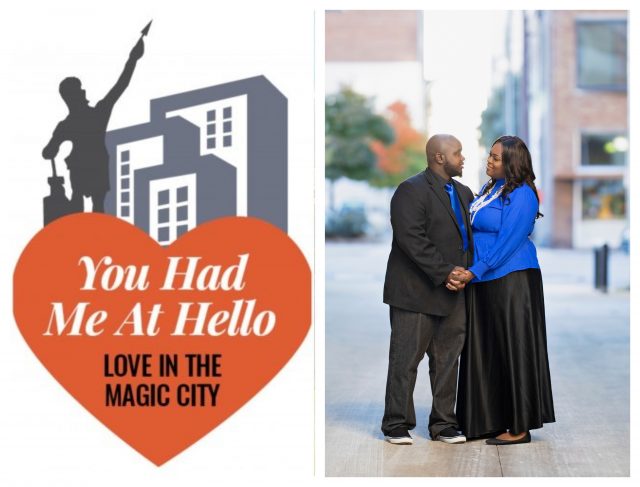 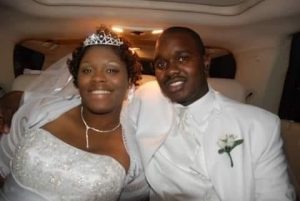 Met: Summer 2008, at Rory’s church, Woodland Park AOH Church of God, in the Woodland neighborhood during vacation Bible school. Both were attending as students and were in the same class.

“Donald was very smart, and every time the teacher asked a question he would answer,” Rory recalled, “and it was my church so I was serving [lunch], and he said something funny and I laughed… After that, he said he started paying attention to me.”

That July, their church organization created a social media chat for the young people. “I remembered our conversation during vacation Bible school and [a monumental step she had taken in the church and wanted to call to congratulate and encourage her]. Afterwards, I tried to holler at her but she shot me down twice,” he laughed. “And [before we stopped talking] I had asked her if she would go with me to the Christmas ball at my job [at Blue Bell Creamery]. We [went to the ball] and she started seeing my personality, and the next day she called me. I thought she was just calling to thank me [for taking her to the ball], but she kept on calling,” Donald said.

First date: The Day after Christmas in 2008, at the Vestavia Rave Movie Theater; they saw Ninja Assassin.

“He wanted to take me out to dinner so bad, but at that time I was in love with McDonald’s and that’s where I wanted to go,” Rory laughed.

“That’s how I knew she was the one. I saved up all this money because I thought we would go to a restaurant, but I asked her where she wanted to eat and she said ‘McDonald’s’, and I didn’t argue with that,” Donald laughed.

They got their food through the drive-thru, “and I took her home and we sat outside and talked in the car for an hour and sang [an old school gospel song] together, and that was the end of the date. A few seconds later she called and we talked on the phone until I got home,” Donald recalled.

The turn: For Rory, after their first date. “I had been in so many other bad relationships and I finally had a good one, I really felt like he was going to be my husband so it was serious for me. He was everything that I prayed for,” Rory said.

For Donald, it was after Rory prepared a birthday dinner for him at his apartment in Pinson.

“It was a Sunday dinner type of meal, fried chicken, mac and cheese, green beans, and she bought me some gifts; I was in shock! I grew up in foster care, and nobody really does anything for me. I was used to people using me, I’d do everything for them, and I wouldn’t get that treatment. That’s why it was a shock and had to go outside just to tell the Lord, ‘thank you for sending her to me.’ [Rory] thought I was crying, but I was just [grateful].

The proposal: In Florence, Ala., at the cabins at Joe Wheeler Park. Donald invited Rory to his family’s cabin trip.

“I talked with my pastor [and uncle] about marrying this woman, and he approved it, so, I called [Rory’s] father on the way down to the cabins about taking his daughter’s hand in marriage, and he kinda grilled me, and then he said, ‘welcome to the family son,’” Donald recalled.

Donald planned to propose on the trip after their family Bible study.

“I asked everyone if they could hang on a little bit longer because I had an announcement. And I gave a long speech about how [Rory] makes me feel and said I want to end this chapter by opening up a new one, and I got down on one knee and said, ‘Ms. Rory Davis, will you marry me?’, and she said ‘yes’.

Rory said she was caught off guard. “…after the Bible study everybody started [clearing the space] around me, and at first, I almost [missed that he was proposing] because I was so sleepy and ready to go to bed until he got to the part about opening up a new chapter, that’s when I [realized] he’s really doing this and I started listening,” Rory laughed.

Most memorable for the bride was “when we were doing our vows and exchanging rings. I put his ring on the wrong finger and everybody in the church laughed,” Rory said.

Most memorable for the groom was “when Rory walked down the aisle, I was thinking to myself man, this is so real, I’m so blessed,” Donald said.

The newlyweds went to a hotel in Gardendale after their wedding, but for their first anniversary went to Pigeon Forge, Tenn., and stayed in the cabins.

Words of wisdom: “Keep God in your marriage. A marriage without God in it is a disaster. You have to communicate; marriages break up because of miscommunication [based on] finances, and feelings. You gotta know each other and how far to go with each other [in times of disagreement],” Donald said.

“Never go to bed angry, always makeup before you go to bed because your spouse could die in their sleep and if something happens you’ll regret not getting it right with them,” Rory said. “Always tell each other you love each other, whether you’re angry or not, because you never know if you’ll see them again.”

Happily ever after: The Gills are members of Ruth Bryant Memorial Temple AOH [Apostolic Overcoming Holy] Church of God, in Powderly, where Rory serves as praise leader and a church mother, and Donald serves as an Elder and Sunday school teacher.