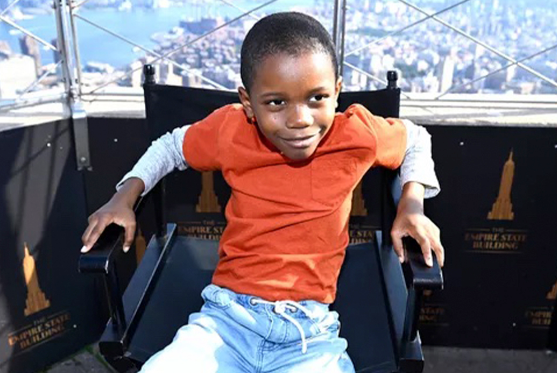 Tariq, the 7-year-old boy dubbed the “Corn Kid,” is donating his favorite food for the holidays.

According to People, Tariq teamed up with Green Giant for Thanksgiving as the food company hoped to make corn the “star” of the menu and give back to communities in need.

“What is Thanksgiving without corn?” Tariq said last month. “Thanksgiving is practically a holiday about corn. I mean, every day could be a holiday if you get to eat corn at some point – but this is the one day that we get to stay home with family, watch a big parade, and then eat corn. Lots and lots of corn. It’s my favorite day of the year!”

In November, Green Giant and Tariq completed their one-week partnership by donating 40,000 cans of vegetables and 50,000 cans of corn at Brooklyn’s City Harvest, which is New York’s first and largest food recovery center.

The brand sent donations to the annual Macy’s Thanksgiving Day Parade, where Tariq appeared on a Green Giant float.

“We are very excited to partner with Corn Kid … as his enthusiasm for corn rivals that of the Green Giant himself,” said Kristen Thompson, Senior Vice President & President, Frozen & Vegetables, B&G Foods in the announcement. “Corn Kid has a giant heart and we are thrilled to help him share his love of corn with his community … with an enormous donation of our canned veggies.”

The “Corn Kid” first captured the nation’s heart in September after a video of him expressing his love for the food went viral.

“For me, I really like corn,” Tariq said as he held a stick of corn. “Ever since I was told that corn was real, it tasted good. But when I tried it with butter, everything changed! I love corn.”