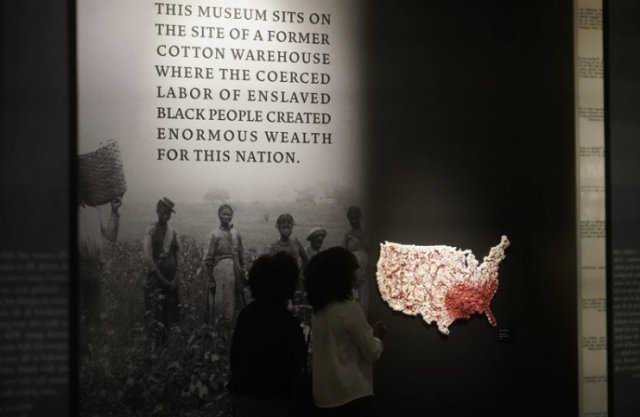 More than 500,000 people a year now visit the Legacy Museum, “which made it the number two attraction for the whole state behind the Space and Rocket Center,” said Lee Sentell, director of the Alabama Tourism Department.

The top paid attraction in Alabama, the U.S. Space and Rocket Center in Huntsville, draws about 850,000 visitors a year. The USS Alabama Battleship Memorial Park in Mobile draws about 300,000 a year.

The opening of the Legacy Museum marked a leap forward for Alabama in capitalizing on its connections to civil rights history, Sentell said.

“We think there are between one and two million people each year that come for that topic, particularly right now with what Equal Justice Initiative has done,” Sentell said.

Attorney Bryan Stevenson, author of “Just Mercy,” came up with the concept of the museum, which traces the history of slavery, the African-American experience and the issue of mass incarceration in the United States.

“What Bryan Stevenson does, everything is world class,” Sentell said. “The people that are attracted to Montgomery for this subject are people who never had a reason to come to Alabama. It’s corporations, boards. The Ford Foundation brought their whole board (of directors) about two months ago. That is very common.”

The Walt Disney Company Foundation also brought its board of directors for a tour more than a month ago and Microsoft founder Bill Gates’ only son, Rory Gates, who graduated last year from the University of Chicago, spent two days visiting the Legacy Museum recently, Sentell said.

“It can’t help but be good,” Sentell said of the potential benefits to the state from corporate leaders.

“They’re all doing it,” he said. “Going to EJI is a great place to start that conversation. We work closely with the people who give those tours.”

The Legacy Museum was open Monday for the federal Martin Luther King Jr. holiday and is offering free admission. King’s Civil Rights career reached national prominence during the Montgomery Bus Boycott in 1955 and 1956, an effort King helped lead while he was pastor of Dexter Memorial Baptist Church.

King also led civil rights marches in Birmingham in 1963, and wrote his landmark “Letter from Birmingham Jail” after he was arrested and held in the city jail.