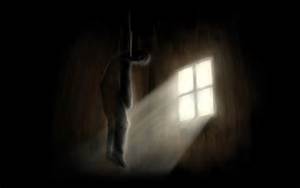 Suicide: The Only Question That Matters
by Thomas L. Knapp
A Dakota County, Minnesota jury voted on May 14 to convict Final Exit Network of helping Doreen Dunn take her own life in 2007.
If the prosecution’s claims are true, Dunn, who suffered from chronic pain, sought Final Exit’s assistance in ending her life; two of the group’s members sat with her as she killed herself by inhaling helium;  they then removed the equipment from the scene so that it would look like she died of natural causes (presumably so that they would not be charged with the crime of “assisting a suicide”).
One of those who sat with Dunn was granted immunity to testify against Final Exit Network. The other has since died, leaving the organization as sole defendant, subject to fines of $33,000.
The conviction reaffirms a disturbing implicit property claim: The claim that the state owned Doreen Dunn’s life, and that it owns yours as well. It would have been more honest to charge Final Exit with “stealing government property.”
Do you own yourself, or does the state own you? With respect to suicide, this is the only question that matters.
To continue living, or not to do so, is the most basic, primal decision each of us makes every minute of every day of our lives.
If you own yourself, then by definition the decision to continue living or to end your life — for any reason, at any time, with or without the assistance of others, in any manner that doesn’t violate others’ rights — is yours alone to make.
Anyone claiming a right to take that decision out of your hands is by definition claiming ownership of your life. But that would amount to slavery, an institution formally abolished in 1865 with the 13th Amendment.
Some try to dodge the baldness of their ownership claim by imputing it to God, with themselves as mere enforcers. But in America, it’s not the state’s job to inflict the religious beliefs of some on unconsenting others.
Some argue a “slippery slope”: Legal assisted suicide, they say,  will be faked to conceal murders. But that gets it exactly backward. If suicide is legal it can be chosen openly in advance (perhaps with sworn affidavits), making it harder rather than easier to fake.
It’s time and past time we required legislators, and implored juries, to recognize the ownership of each individual over his or her life — and death.