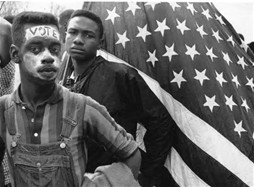 Washington, D.C. – (Thursday, July 2nd, 2015) – Last Thursday, Congresswoman Eddie Bernice Johnson released the following statement in recognition of the anniversary of the landmark Civil Rights Act of 1964, one of the most sweeping pieces of civil rights legislation since Reconstruction:
“As we commemorate the anniversary of the Civil Rights Act of 1964, we remember the debt all of us owe to the courageous leaders of the 1960’s Civil Rights Movement – many of whom fell victim to unconscionable crimes because of their choices to lead the march against discrimination, injustice and inequality. Their unyielding hope lay at the foundation of the progress we’ve made as a nation.
The landmark Civil Rights Act of 1964 helped bring an end to the Jim Crow era by prohibiting discrimination on the basis of race, color, religion, sex, or national origin.  Although the Civil Rights Act of 1964 represents enormous progress, there remains a great deal of work to be done. In the wake of recent tragedies, such as the shooting in Charleston and the numerous incidents of police violence against minorities, it is clear that the nation remains deeply divided, and we are all responsible for leading the effort of reconciliation, so that we can heal the wounds of prejudice and hatred in every city, county and state. We must work together to restore our nation’s dignity.
I call upon Members of Congress on both sides of the aisle to act in a bipartisan fashion to honor the sacrifices of the brave leaders of the Civil Rights Movement by continuing to advance civil rights efforts around the country. This begins with protecting the right of every American to participate in the democratic process by supporting the Voting Rights Advancement Act of 2015, which I am co-sponsoring. Supporting this piece of legislation would be in the spirit of the Civil Rights Act of 1964, ensuring that America lives up to its creed that all individuals are created equal.”
###