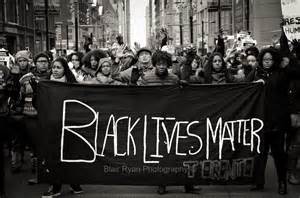 WASHINGTON (AP) — Hundreds of Black Lives Matter activists, black and white, marched outside the Minnesota State Fair this weekend, hoping to bring attention to the deaths of African-Americans at the hands of police.

Inside the fair, a booth also represented the group, with T-shirts bearing the slogans “Black Lives Matter” and “All Lives Matter” for sale. Todd Gramenz, who reserved the booth, chatted with fairgoers while the other protesters were kept outside.

The competing activities in Minnesota underscore the challenge that Black Lives Matter faces as it evolves from social media hashtag to full-blown movement. Its fluid, organic nature and loosely organized structure generate confusion about exactly who is in charge, who can legitimately speak for the group and its long-term goals.

Tracing its roots back to the fatal 2012 shooting of 17-year-old Trayvon Martin in Florida, the Black Lives Matter movement gained national ground after 18-year-old Michael Brown was shot and killed by a white police officer in Ferguson, Missouri.

Since then, deaths of other unarmed black men at the hands of law enforcement officers have inspired protests under the “Black Lives Matter” moniker.

Some are affiliated with the original Black Lives Matter network founded by Opal Tometi, Patrisse Cullors and Alicia Garza and their allies. But some are not, even though they use the slogan.

Garza said in an email interview that her organization — which has 26 chapters, stretching to Ghana and Canada — doesn’t try to control who uses the name.

“Anytime someone identifies with a movement to make black lives matter in this country and around the world, that’s a good thing,” she said.

Said Tamika Mallory, part of the allied-Justice League NYC: “There is no way to lead the entire Black Lives Matter movement because it is multifaceted.”

Some similarly loosely organized social movements, like Occupy Wall Street and the Tea Party, evolved beyond their grassroots beginnings, while some died on the vine.

Others followed the lead of the 1960s civil rights movement, which caught on and organized, birthing groups like the Southern Christian Leadership Conference and the Student Nonviolent Coordinating Committee.

Having small nebulous groups linked through social media and a shared cause may be enough for now, but odds are against such groups surviving for the long haul and enacting national change, said Deana A. Rohlinger, a Florida State University sociology professor who studies social movements and collective behavior.

“What remains to be seen is if Black Lives Matter can make that transition,” she said. “Activists do really good work locally. But if you want to affect politics and politicians, then you really do have to move up your organization to a more structured format that can engage politicians and lobbyists on their turf.”

The Black Lives Movement gained fresh attention lately as activists claiming to represent the group interrupted a speech about to be delivered by Bernie Sanders, a Democratic presidential candidate.

And a Texas sheriff criticized the movement after one of his white deputies was killed Friday at a Houston gas station; a black man has been charged with murder, accused of firing at the uniformed deputy 15 times, including shooting him in the head.

Police have provided no motive for the shooting, but Harris County Sheriff Ron Hickman questioned whether it was spurred by anger over the killings of black men by police. He added that a “dangerous national rhetoric that is out there today … has gotten out of control.”

Garza called any attempt to link the Black Lives Matter with the killing “racist and ridiculous.”

“Our hearts go out to anyone who loses a loved one on the wrong side of a gun. Black families know that pain all too well,” she said.

Garza said it’s the news media that equates every black protest with the movement and the network.

“He’s probably just in it for the money,” said Turner, who is organizing a Black Lives Matter march on Democratic Minnesota Gov. Mark Dayton’s mansion on Tuesday to protest him labeling their march outside the fair inappropriate.

Calls to numbers for Gramenz, who reserved the booth, were not returned.

The Rev. Charles Williams II of the National Action Network said “folks with their own agendas … are going around and trying to coin their movement or hashtag” under the Black Lives Matter banner.

“I feel like the individuals that are trying to hide under the banner, they need to be out called,” said Williams, president of the civil rights group’s Detroit chapter.

“A lot of people are taking this platform of ‘Black Lives Matter’ and getting a little abusive with it. This is being used as a platform to be more rebellious,” said Oliver, who says she understands the movement’s goals as both a black woman and an officer.

“BLM is already a national group, and we are increasingly becoming international,” she said. But “we’re less concerned with the structure of BLM as we are with the function and our impact.” 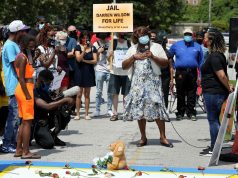