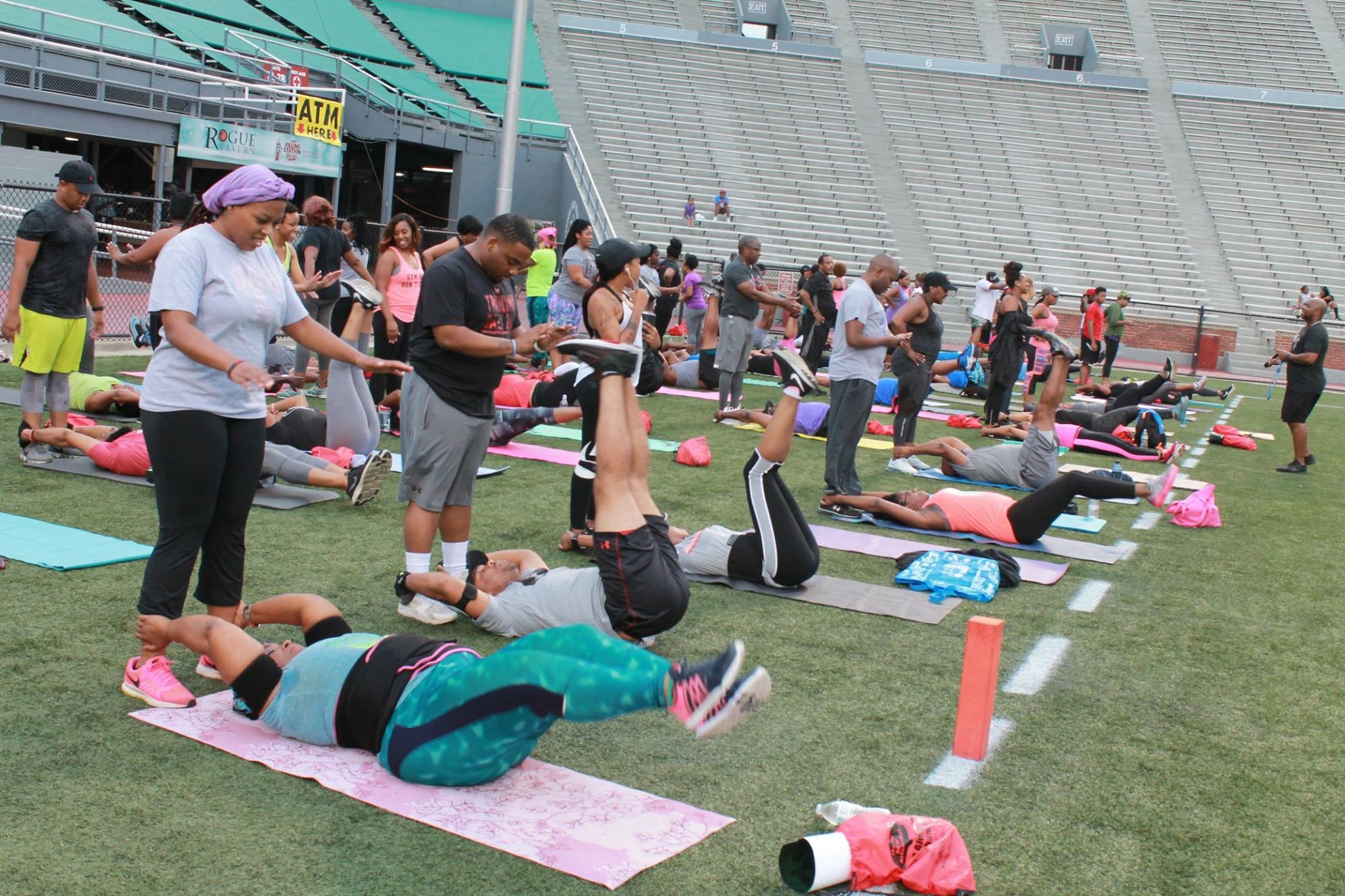 In the summer of 2016, Walter T. Williams couldn’t walk from his car to the front door of his home without running out of breath.

He weighed 332 pounds, and the excess weight made walking those 26 steps difficult.

But in September 2016, Williams found a new way of living and walking. He enrolled in the free I Am BHAM fitness boot camp, offered inside Legion Field through the City of Birmingham and Birmingham Parks and Recreation.

“It was hard,’’ Williams, 51, said of the camp. “The biggest thing was getting used to climbing the steps in the stands and doing push-ups and sit-ups. After the third week out there, it got easier.’’

Today, Williams weighs 268 pounds and is in training to run his first, full marathon in October in the Virginia/Washington, D.C. area. He did his first, half marathon in Huntsville, Ala. in July.

He wants to lose 28 more pounds by the end of the year. He credits I Am BHAM, running and a drastic change in his diet (eating more salads, vegetables, baked chicken and baked fish, eliminating fried foods and breads, and limiting sweets) for helping him improve his health.

“I know other people who’ve been in boot camps, but they haven’t progressed as we have out here,’’ Williams said of the program at Legion Field. “My wife is happy, my kids are happy, and my doctor is happy. I feel good.’’ 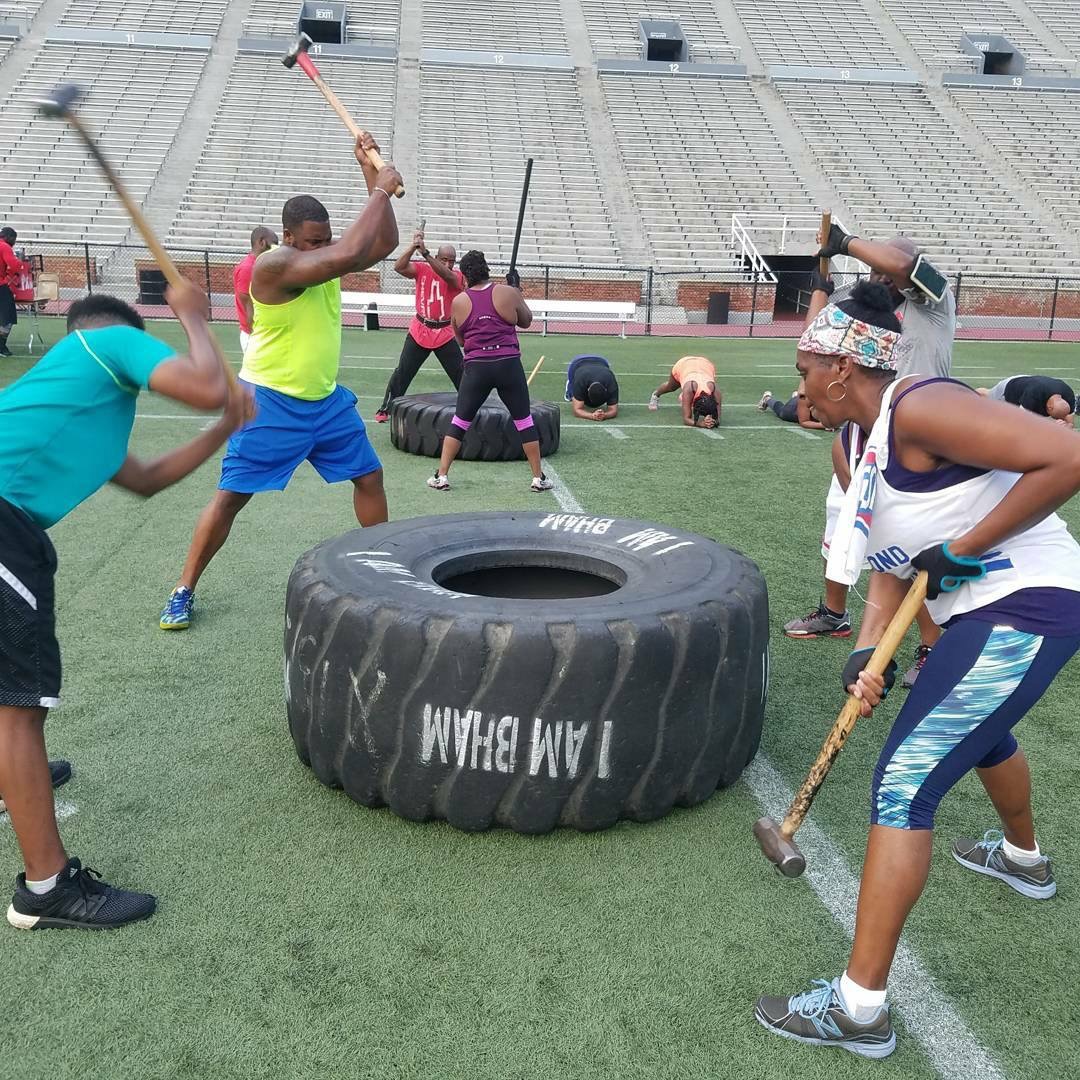 Stories like Williams’ are all too familiar for boot camp founder Joel Simmons, a certified fitness trainer and a recreation center director for Parks and Recreation. Simmons started I Am BHAM in 2007 as a way to show people a healthier way of living after seeing Alabama and Birmingham always ranked at the top of lists for national statistics for obesity rates. Three years ago, he started holding the workouts at Legion Field through the City of Birmingham and Parks and Recreation. BHAM is an acronym for Being Healthy Active and Motivated.

“Doing this is a form of me giving back to the community,’’ said Simmons. “I’ve done fitness for over 20 years, and I know the difference fitness can make in one’s life.’’

The boot camp typically starts in May and stretches into October. Currently, Simmons is leading “The Classic Fitness Challenge’’ at Legion Field. It was named to highlight the annual Magic City Classic football showdown between Alabama A&M University and Alabama State University.

The free boot camp is held every Monday and Thursday from 5:55 to 7:05 p.m. inside Legion Field, 400 Graymont Ave. West. The camp is on a break this week. Classes will resume Sept. 11.

The camp attracts people of all fitness levels, occupations and economic backgrounds.

“We average about 100 people a class,’’ said Kevin Moore, director of Birmingham Park and Recreation. “People are driving all the way from Helena, Pelham, Trussville, Bessemer, McCalla and Birmingham.’’

“We are open to everyone,’’ Moore said. “Of course, we want to promote our city, which is why it’s called I Am BHAM. But at the same time, we want to impact people’s lives, no matter where they are.”

“The beginner and intermediate participants are getting praise from their doctors. One woman told me that her doctor said to give me a high five,’’ Simmons said. “The camp has made that much of a difference in her life.’’

“Before I Am BHAM, I was always eating what I wanted,’’ Collins said. “I craved sweets a lot, and I ate late at night. I wanted to make a change.’

And change she did. Collins not only remained committed to classes, but she also embraced the eating and nutrition tips Simmons provided.

She would like to lose at least 20 more pounds.

“I’m not on blood pressure medication anymore. I got off in October or November 2016,’’ Collins said. “I sleep better, and I can walk longer distances without getting tired. Right now, I feel like I’m about 30 years old.’’

Messing up one’s hair has long been a deterrent for some women when it comes to working out. But that was not the case for Erica Packer, 42, of Birmingham. She gets a sew-in, puts on a baseball cap and is good to go for her workouts.

“We are out there doing the same thing. We are trying to get our bodies right,’’ Packer said.

She credits I Am BHAM for helping her lose 20 pounds since she started in May.

“Before Joel’s class, I had Restless Leg Syndrome. I don’t have that anymore,’’ Packer said, adding that she now has more energy. “Before I go to church on Sunday, I go walking. I’ve even gotten my oldest child to do the boot camp to keep him in shape before he goes off to the military in October.’’

Another excuse that keeps people from exercising is their job. But Packer finds a way to be in Simmons’ classes even if it means arriving a few minutes late after fighting through U.S. 280 rush hour traffic from work.

“I Am BHAM is something that I’m passionate about and I enjoy doing,’’ Packer said. “I was doing Zumba on Mondays and Wednesdays at another location. Now I just do Zumba on Wednesday because I’ve got to get to Legion Field on Monday.’’

She said she’s never had a class like I Am BHAM.

“Joel is like a drill sergeant, but he makes it fun,’’ Packer said. “You tell yourself: ‘You have to do this. You need to do this. There’s no quitting.’ And that’s all because of Joel.’’

Simmons said the I Am BHAM movement is not just about weight loss. It’s also about getting stronger.

“People are improving their muscle endurance and sleeping habits. They are having a better performance in their day-to-day activities,’’ he said. “We go beyond Legion Field. We also do team building activities at churches, youth groups and senior citizens’ programs to spread the message of having a healthier lifestyle.’’

Moore thanks his staff, Parks and Recreation Recreational Superintendent Terry Bouchillon and Simmons for looking at recreation in a new way to bring about change.

“You don’t really see this in other cities,’’ Moore said. “And the fact that they stepped outside the box to do something different, means a lot to me as a manager because we are not doing something that is easy and conventional.”

“There’s minimal equipment because we are using Legion Field,’’ Moore said. “It’s a win-win for everyone.’’

For more information and updates on class schedules, please visit the group’s Facebook page at https://www.facebook.com/I-Am-BHAM-Fitness-Camp-898404703561454/?fref=ts