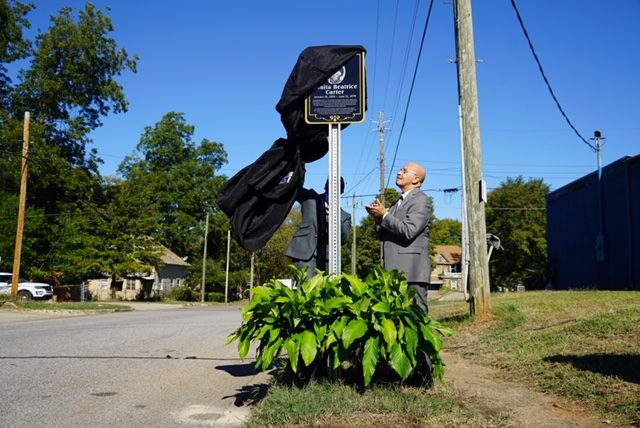 The ceremony was held at the intersection of Richard Arrington, Jr. Blvd. N and 45th Street in the Kingston community where former mayor Arrington and Mayor Randall Woodfin unveiled the memorial.

The shooting of Carter led to multiple racially charged protests and counter-protests. Frustrated by Carter’s death, Arrington traded his council seat for the mayor’s seat and was elected as Birmingham’s first black mayor.

“I was on the shoulders of the people. They were carrying me. I had such good support we were able to get things done,” said Arrington.

Arrington said he wishes that young people – black and white – really knew the history and can recall “where we’ve come from and what the struggle has been like to move Birmingham from one of the most racially segregated cities in America to where we are today,” said Arrington.

Woodfin said Birmingham is home to many pivotal names that defined the fight for social justice such as civil rights leaders Fred Shuttlesworth and Ralph David Abernathy and Birmingham businessman A.G. Gaston. “But today we stand in memory of a woman who would become a martyr for our community, Bonita Beatrice Carter . . . . And it’s long past time that we say her name . . . and it’s most important to remember Bonita was simply an innocent woman,” Woodfin said.