Driving by Vibe Street Studios on 16th Avenue South at 12th Street on Birmingham’s Southside, it is easy to see the mural of Breonna Taylor, one of the many African Americans who have been slain at the hands of police. Beneath the Kendrick Lamar lyric “We Gon’ Be Alright,” dozens of black handprints cover the panel to the left.

But they’re not just handprints—each one has the name of a Black person who was killed by law enforcement.

“The sad thing was there’s not enough hands,” said Diva Reese, the artist behind the drawing. “I painted as many hands as we could, … but when I looked at the list recently of unarmed Black people that were victims of police brutality, it was upwards of 200. I couldn’t paint 200 hands. I didn’t have enough space.”

The mural is the first for the 26-year-old Birmingham-area resident, who said she’s been an artist for her “whole life.”

“My momma will tell people I’ve been drawing since I could pick up a pencil,” Reese said. “I am completely self-taught.”

The unrest that broke out in Birmingham on Sunday, May 31, left a trail of destruction that began at Linn Park downtown and stretched to points south and west. Residents and business owners boarded storefronts to avoid the potential damage.

Vibe Street Studios is well south of the epicenter of where the looting took place, but owners of the photography and podcast studio took no chances, covering their plate-glass windows with plywood. As other artists painted the protective coverings in other areas, Reese saw an opportunity.

“She reached out to us,” Vibe Street owner Micah Lewis said. “When we put the plywood up, we were done with it and thought, ‘That’s good enough.’ Then [Reese sent me a direct message (DM)] and asked, ‘Could I paint a mural?’ We thought, ‘Oh, that’s a great idea.’”

The boarded-up Vibe Street Studios gave Reese a chance to use her voice.

“They gave me free rein,” she said. “They told me I could do whatever I wanted to do, so I chose to … bring light to Breonna Taylor.”

Reese felt that Taylor’s death at the hands of police had been overshadowed by the killings of George Floyd and others. She was also bothered by the apparent cover-up of the case by Louisville, Kentucky, police.

USA Today reported on Tuesday, June 23, that Louisville Metro Police Department Officer Brett Hankison was terminated for his role in the shooting death of Taylor. The 26-year-old Taylor was shot by officers at her apartment on March 13, as they entered to serve a no-knock warrant. Her boyfriend thought the officers were intruders and fired a shot as they entered. Taylor was shot eight times in the ensuing gunfire from officers.

“I want the officers who killed Breonna Taylor to be arrested and charged,” Reese said. “I just felt like her case does not get enough attention. I’ve had several people, especially from this neighborhood, DM me and say they didn’t know who Breonna Taylor was before seeing the mural.”

“That was the point,” the first-time muralist continued. “When I was painting it, a lady pulled up and asked me, ‘What’s your message?’ I said, ‘Research Breonna Taylor,’ because she didn’t know who she was either.”

Reese completed her mural in just two days, and she’s received nothing but positive feedback from countless passersby stopping to take selfies with her mural in the background. 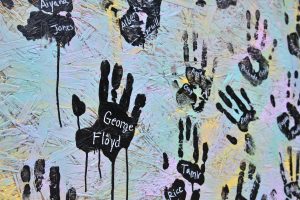 Diva Reese was born in Las Vegas, Nevada—and, yes, Diva is her real first name. But does she meet the definition of a diva: a self-important person who is temperamental and difficult to please?

Reese grew up in the Birmingham area, graduated from Gardendale High School, and was set to go to New York University to study her “two loves”—political science and fine art. Instead of going to college, the then 19-year-old Reese took a job she was offered: restaurant manager at a shop in Mountain Brook.

“Food and art have always been among my passions,” she said. “My mom always baked [when I was] growing up. My great-grandmother was actually a baker, so I just combined our passions. That’s a business my mom and I own.”

“Our catchphrase is ‘Portable, Stackable, Snackable,’” Reese said of the treats she and her mother make. “It’s actually a cupcake, a cake in a cup. They’re all layered. They have different names, … fun, really cool names … based on pop culture.”

The blue raspberry shortcake, for instance, is called the “Uncle Snoop.”

“My mom is from Compton, [California], so when I see the color blue, I associate it with [hip-hop artists] Snoop Dogg or [the late] Nipsey Hussle.”

While the Vibe Street Studio effort is Resse’s first mural, it is just her latest flirtation with art.

“I’m in business, where I teach people how to paint,” she said of her other venture, Nontoxic. “It’s a networking experience for people from all different backgrounds. My demographic is very weird. I have everyone from Mountain Brook moms to 20-year-old kids coming to paint on a weekly basis.”

Neither business has a brick-and-mortar location, although she has a residency at Tostadas Mexican restaurant in Homewood.

“We call it Nontoxic Tuesdays, and I teach [through] paint parties there weekly,” the entrepreneur said. “I work with a lot of local clubs and breweries. I’ll put on seasonal events for them, or we’ll have a paint party and private parties.”