Growing up in the Bronx, New York, Lillian Brooks was surrounded by individuals of different races, so it wasn’t unusual for her to be accepting of people of diverse backgrounds. However, she never thought she would marry outside her race.

Thirty-five years later Lillian said marrying her husband was the best decision of her life. On the other hand, Lillian’s husband Kyle was raised in South Carolina where people were not always as accepting. Nevertheless, Kyle’s parents instilled in him and his brother the belief that all races are equal in God’s sight.

“Although my parents were concerned about how others would accept our marriage, they gave us their wholehearted support,” Kyle said who was also easily accepted into Lillian’s family and received their full support.

According to a study conducted by the University of Utah, married couples who had shared values reported higher levels of marital happiness and individual well-being than those who did not.

Not everyone in Kyle’s family was excited to learn of the upcoming nuptials. “When my grandparents learned I was marrying a black woman they disowned me,” Kyle said. “Not sharing my beliefs, they do not agree with the life that we have chosen,” Kyle added.

That was 1986. Views on interracial marriage have improved. According to the Pew Research Center, one in five new marriages is now interracial.

While statistics suggest that interracial marriages in America have gained greater acceptance, not all couples have that experience. Still, they have found ways to cope. Shared religious faith along with a community of fellow believers have been invaluable in navigating the cultural complexities.

Throughout their marriage Kyle and Lillian, now living in Bessemer, AL, have always had friends who share their beliefs and support them.

“Being part of an international brotherhood of Jehovah’s Witnesses has opened to us opportunities to enjoy a variety of cultures,” Kyle said. “The Bible reminds us that God is not partial and that he accepts all regardless of race or nationality.”

Even though interracial marriage is more widely accepted one viewpoint persists, namely, What about the children? They won’t belong to either race. They won’t fit in. They’ll be confused growing up.

“We heard them all,” Kyle said. Kyle and Lillian were aware of the challenges they might face raising their daughter Heather adding, “Rearing children is hard without the added pressure of the prejudices that some have,” Lillian said, “but we taught Heather not to allow people to put her in a bubble. She didn’t need to choose her race.”

Heather’s parents taught her to focus on the more important things such as developing her relationship with her God and said they are “proud of her decision to serve God.”

The couple, now empty nesters, enjoy spending time together in their volunteer ministry and hosting friends in their home.

“We had challenges in our lives,” Lillian said, “we had to be selective in our choices of where to live, where to go, etc., but having God in our marriage we were able to withstand the challenges.”

More information on the activities of Jehovah’s Witnesses, including resources for happy family life, can be found on their official website, www.jw.org. 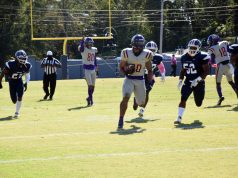