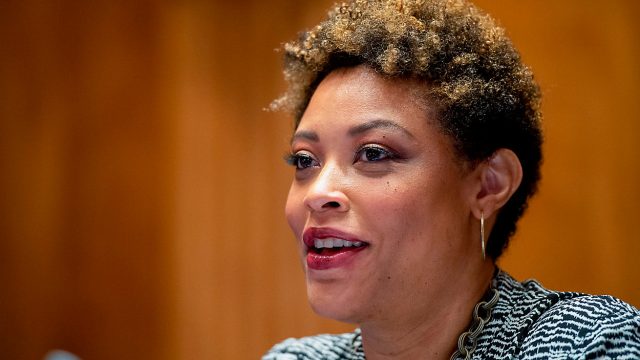 Shalanda Young, who has been serving as acting director since March, was confirmed this week by the Senate in a widely bipartisan vote, making her the first Black woman to lead the White House budget office.

Young is a popular figure among Congressional leaders after previously serving as a staff director on the House Appropriations Committee, where she drew widespread bipartisan praise for her role in negotiating bipartisan funding deals.

“I’m pleased to support Shalanda Young as the next OMB Director. Since February 2021, I have supported her for this position,” Shelby wrote on Twitter. “A former Appropriations Cmte Staff Director, she knows the process inside-out and has demonstrated her ability to work with both sides to get the job done.”

“The Senate has confirmed President Biden’s highly qualified nominee to serve as Director of the Office of Management and Budget: Shalanda Young,” Senate Majority Leader Chuck Schumer, D-N.Y., wrote on Twitter after the vote. “She is the first Black woman ever confirmed by the Senate to lead OMB.”

“Another glass ceiling shattered by a remarkable member of the President’s historic Cabinet,” Schumer said on the Senate floor ahead of the vote, adding that it “shouldn’t have taken this long” to confirm Young to the role.

“She knows the budget and appropriations processes like the back of her hand,” he continued. “She’s proven capable of working with Republicans and Democrats alike, and it was through her guidance the administration notched some of its biggest victories including the passage of the bipartisan infrastructure law.”

The White House initially tapped Neera Tanden to lead the office, but her nomination was withdrawn after Senate Republicans, along with key moderate Democrat Sen. Joe Manchin of West Virginia, criticized her past acerbic partisan rhetoric on social media, mainly targeting Republicans. The Biden administration said after her failed nomination that they would find another role for Tanden in the White House, and in October named her White House staff secretary.

A number of lawmakers on both sides of the aisle pushed for Young to be named to the director role, even dating as far back to her confirmation hearings to serve as deputy OMB director.

“You’ll get my support, maybe for both jobs,” Sen. Graham said at the time. “Everybody who deals with you on our side has nothing but good things to say. You might talk me out of voting for you, but I doubt it.”

“You may be more than deputy,” Sen. Kennedy said.

“She would have my support, and I suspect many of my Republican colleagues would support her, as well,” Sen. Shelby noted at the time.

“Not only is she eminently qualified to lead the OMB and as knowledgeable as anyone about the Congressional appropriations process, Shalanda also maintains strong and positive relationships on both sides of the aisle,” House Majority Leader Steny Hoyer, D-Md., wrote in a statement following the vote Tuesday. “She deserves great credit for helping to lead the successful effort to enact the Fiscal Year 2022 omnibus this week, a major step forward for our country.”

“It’s no surprise that Democrats and Republicans alike were calling for her nomination and swift confirmation,” Hoyer added. “I enjoyed working closely with her when she served as Staff Director for the House Appropriations Committee, and I look forward to continuing to work closely with her in the months and years ahead as she works with the President to ensure that Congress and the Administration are partnering to deliver For the People.”