Community activist Harry “Traveling Shoes” Turner, who was raised in Birmingham’s Gate City neighborhood, said the area wasn’t known for anything bad during his childhood.

“The baddest thing they had when I was growing up there was me,” said Turner, who at age 11 accidentally shot himself in the left leg with his parents’ 0.38 caliber pistol.

After doctors told the family that Turner’s leg wouldn’t heal and he would never walk again, the youngster asked his parents to take him to church. At the time, they weren’t religious, but they took him to New Testament Baptist Church in Birmingham’s Smithfield community.

“I couldn’t even spell church, but they take me to church, I give my life to God—and a year later, I start walking and preaching,” Turner recalled.

The activist is still walking and preaching on the streets of Birmingham and among those fighting on a grassroots level for residents in a city that has become increasingly dangerous with homicides heading to record highs.

After Turner became a Christian, his stepfather, Walter Barabino, and mother, Mary, soon joined him. His mother later started traveling around and performing her ministry at tent revivals, and she still ministers in and around Birmingham today.

At age 12, while riding in the car with his mother, Turner first heard the gospel song “(Got On My) Traveling Shoes,” sung by Bishop Jasper Roby of the then Apostolic Overcoming Holy Cathedral, and was immediately drawn to it.

“I said, ‘I’m going to sing this song tomorrow instead of that slow ‘Amazing Grace’ song,’ not even knowing how much amazing grace was part of my life,” Turner said.

Singing “(Got On My) Traveling Shoes,” became a part of his sermons when he would preach as a child, and his mother urged him to improve how he would sing the song.

“She said, ‘Lovie, I love that song, but you just said that one verse too many times,’” Turner recalled. “So, the next time I preached, I added another verse.”

Turner, who turned 57 in August, kept adding verses to the song each time he preached. At 13, his unique style earned him an invite to a church in Atlanta, Georgia, where he first adopted the name of the gospel song as his own. 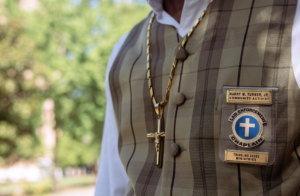 “As they got ready to introduce me, the pastor said, ‘Oh, he don’t need ‘Amazing Grace,’ he’s got his own song. That’s the ‘Traveling Shoes’ preacher.’ [I] came back to Birmingham, and it stuck,” Turner said.

Soon after graduating from the former L. Frazier Banks High School in Birmingham’s South East Lake neighborhood, Turner went to Amityville, New York, to visit his birth father, Harry Sr., and his wife, Anita, and began working in real estate with his father.

“The next time my mom saw me in Birmingham, I think I was the youngest real estate broker in New York,” Turner recalled.

After 12 years in New York, Turner grew tired of his lifestyle up North, with a marriage he’d been in since he was 19, his work in real estate, and trying to get to know his father and stepmother, who he didn’t grow up with.

“I’ll tell anybody, New York is so fast. You are talking about a kid coming out of high school, and all I knew was that you preach and go to church,” he said. “[Then I got] into real estate, where it’s a fast market. You’re the first one up [in the morning], you’re the last one to sleep, and I was trying to balance that with a marriage at a young age. … I [didn’t] have a foundation anymore.”

When he got back to Birmingham in the early 1990s, Turner got a job with the United States Postal Service, the first job he’d had outside of real estate and one he still holds today, almost 30 years later.

Turner, who serves as the legislative director for the Birmingham area chapter of the American Postal Workers Union, said his activism in the community takes as much effort as his day job.

“I have to tell people that I actually have a job because they’ve always seen me doing the activism,” he said. “When I first got hired on at the post office, I worked at night, so all my days were free.”

Being back in Birmingham also gave Turner the opportunity to spend time with his grandmother, Yvonne Turner, who was involved in the Civil Rights Movement of the 1960s and a lifetime member of both the Rev. Fred Shuttlesworth-cofounded American Christian Movement for Human Rights (ACMHR) and the Rev. Dr. Martin Luther King Jr.-founded Southern Christian Leadership Conference (SCLC). Turner said his grandmother, who died in 2015 at the age of 88, told him many stories of her time in the movement.

“Every time I would go by to visit my grandparents, [my grandmother] would tell me one of these stories about what it was like when she was arrested protesting the Woolworth’s stores,” he recalled. “She was part of that protest for them to break down those segregation barriers.”

Listening to those stories made Turner realize that he was “more than just a postal worker.”

“When I would hear about injustice in the community, I would just show up,” Turner said, though people never paid much attention to him.

That changed following a tragedy in Birmingham’s Fairfield neighborhood in the 1990s, when a baby was found in a dumpster.

“[Then-Fairfield Mayor Larry Langford] wanted to do a vigil at the garbage can for the child. I wrote a poem, went to his office, and asked, ‘When we do this vigil, can I read the poem?’” Turner said.

Since that time, he has held vigils across Birmingham and around the metro area. He also connected with community activist and radio broadcaster Frank Matthews.

“[Matthews] started taking me around to the worst parts of the city … [and] told me, ‘They’re gonna respect you today because, I’m gonna tell them to,’” Turner said. “He added, ‘But after today, you’ve got to earn it.’”

To this day, Turner visits families of homicide victims to help any way he can, including using his law enforcement contacts.

Some of his work has taken a toll, Turner said: “Because I was seeing death after death—a woman being burned up by garbage cans, a boy in Bessemer who was set on fire by kids who threw kerosene on him—I became a manic depressive, and nobody knew it.”

He found a balance with the “Laughing with Shoes Comedy Show,” which he started at the Birmingham Public Library in 2009. The program helped him “cope with the trauma and the tragedy,” he said.

“I see a time we can come and laugh,” said Turner, who eventually stopped doing the comedy shows but plans to bring them back this fall.

Turner is also involved in a community outreach initiative that has cemented his legacy in the Birmingham community: roller-skating nights with young people across Birmingham. He and his daughter Jaynie, 17, who he calls “Princess Shoestring,” will pay for 20 to 50 children to go skating.

Turner himself grew up with a love for roller-skating. Shortly after shooting himself in the leg at 11, Turner was already trying to get back on his skates, which he had worn down to the metal plates above the wheels.

“I get home from the hospital after I shot myself. I’ve got a cast on my left leg, and my best friend comes over to visit me. I said, ‘Man, I sure would like to skate.’ He said, ‘Well, you’re gonna have to wait, man, until you get better.’ I said, ‘No, no, no. My mama’s at work. Go get me a skate,’” Turner recalled.

Turner is such a popular skater that he performed during halftime at Birmingham Squadron basketball game at Legacy Arena in January.

“I said, ‘Of course, I’ll come, but on one condition: I have to bring Princess Shoestring.’ They said, ‘OK,’” said Turner, who teams up with Jaynie to host voter registration drives downtown Birmingham.

Reaching kids is important because many of the kids in and around Birmingham grow up in tough environments. Turner believes skating could be one way of getting their attention.

And that sums up Turner’s ministry: a man who looks for ways to pick up those who fall.