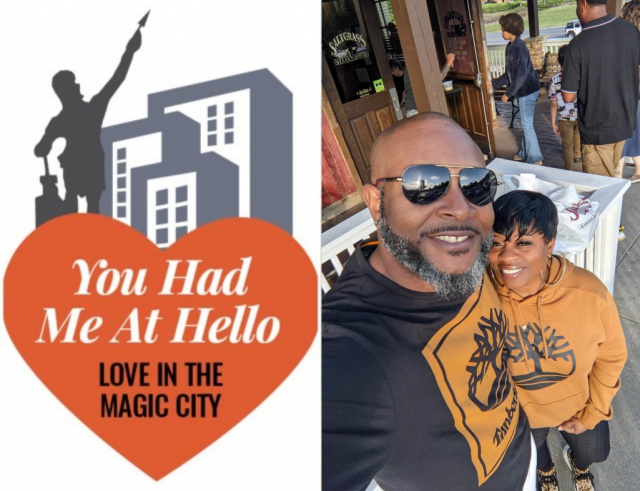 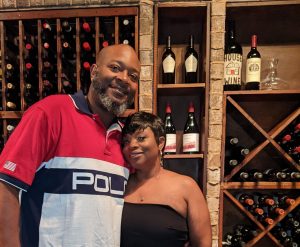 Met: January 1999, at Shelavonne’s home in Fairfield. Their mutual friend, Terrance, stopped by to hang out with Shelavonne and her friend and Elijah was with him. “I was actually going to introduce Elijah to [my girlfriend], but [as] the night continued with all of us just sitting there chilling, he ended up not being interested in my friend and being interested in me,” Shelavonne said. “I was flattered, but we were both [ending their respective marriages], and chose to keep it as friends [while undergoing the divorce… It took two years.”

First date: In 2001 at the Holiday Bowl in Bessemer. “[Bowling] was definitely competitive, and Elijah was beating my [behind], he did not care, or take any leniency on me and my lack of bowling skills,” Shelavonne laughed.

“I recall her paying me back on the air hockey table,” Elijah said, “and over the past 20 years, I’ve never beaten her, and never have I ever seen anyone else beat her.”

“After that, we went back to his place and played his Sega Dreamcast, and that was competitive too. We’re a competitive couple, and to this day we still do stuff like that. We make a game out of anything,” Shelavonne said.

The turn: March 2003 when Elijah left for Stuttgart, Germany to train for his job with Oris Automotive.

“He was only gone one month, but the absence of each other made us realize that we can’t live without each other,” Shelavonne said.

“The time away from her was hard, we stayed on the phone every day. She even tried to plan to come and see me but by the time she would’ve got her passport I would have been leaving [to come back to the US],” Elijah said.

“Back then we used phone cards and we used to load them up and burn them up every day,” Shelavonne said.

The proposal: The couple made a joint decision to get married, but Elijah was “old school, so I still wanted to get permission from her mother and father and have their blessing,” he said. Elijah did a proper proposal and presented Shelavonne with a ring in front of her parents on the back porch of their home in Fairfield.

‘It was pretty straightforward, her family was around and I just got on one knee and asked her to be my wife,” said Elijah.

“I was surprised because I wasn’t expecting it that soon [upon his return from Germany]. We had discussed wanting to be married but I didn’t know he was ready that fast, but I was ready too, and I was with it,” Shelavonne laughed. “Once he got their permission we planned [quickly] to have a wedding a month later.”

The wedding: In Wenonah at Christ Ministries Holiness Church, officiated by Shelavonne’s uncle, Minister James Nation [of New Covenant Baptist Church in West End]. They chose pastel colors. “It was a summer wedding and I wanted light colors, but we didn’t limit it to just [a chosen few],” Shelavonne said.

Most memorable for the bride was their wedding reception. “It was the crunkest party,” Shelavonne said, and when the DJ played [Lil Jon’s] ‘From The Window To The Wall, my mom, who is a minister was singing [provocative lyrics] and she didn’t know what she was singing and it was so funny,” Shelavonne laughed.

Most memorable for the groom was “when I first got to kiss my wife and [realized] it was official and she had my last name,” Elijah said.

The couple’s honeymoon in Cancun Mexico was a gift from Shelavonne’s mother, Lorena Todd.  “We did a lot of chilling but enjoyed our nightly walks on the beach. That’s when I fell in love with the beach and the water,” Shelavonne said.

Words of wisdom: “Tone is very important [during] communication,” Shelavonne said. “You can’t talk to someone screaming and yelling, so your approach, the tone of your voice, and sincerity are all important,” she said.

Elijah said, treat marriage like you treat dating, “Treat her like you just met her, do everything to keep it new and fresh. Travel, find things to do to spend some time together,” he said.

“And tell her you love her all the time, I love it! He’ll say you know I love you right, just out the blue, compliments and flattery are good to keep the spark,” Shelavonne said.

Happily ever after: The Boglins are a blended family with five children: Joslyn, Alexus, Colby, Elijah ‘EJ’ and Joel.

Shelavonne, 46, is a Fairfield native, and West End High School grad. She attended Bessemer Tech where she earned an associate’s degree in accounting and owns a tax-preparing company, LT Enterprises in Roebuck.

Elijah, 46, is a Bessemer native and attended Shades Valley High School. He served in the US Navy for eight years as a boiler technician and works as a robot operator at Mercedes Benz in Vance.

Next year the Boglins will celebrate their 20th anniversary and will have a vowel renewal ceremony in Cape Town, Africa.