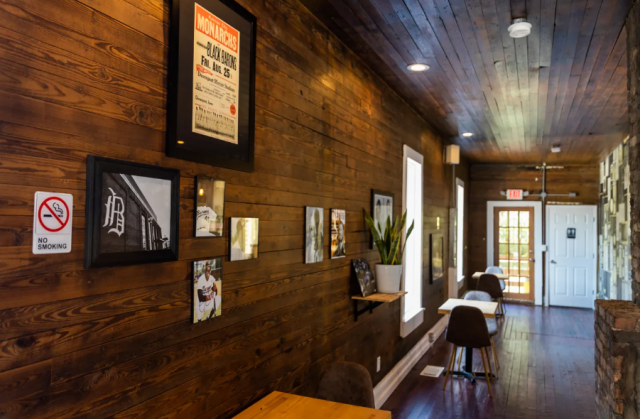 Troy Whetstone, owner of the newly opened Modern House Coffee Shop in Titusville, said he wasn’t one for coffee until recently. “I’ll go grab a Mountain Dew if I need some hype,” Whetstone said.

Modern House, which has been in the works since 2019, held its grand opening Sept. 23 in Titusville. Whetstone wants to do more than just serve coffee. He wants his shop to serve as a catalyst for people experiencing homeless to learn valuable skills, he said.

“Many of these companies, the minimum is soft skills, being a people person, dealing with those type of things, knowing how to interact with people, so that’s what we kind of doing here. We’re incorporating that here through coffee,” he said.

In addition to providing people skills training and paying $12 per hour his business will have a partnership with Lawson State Community College to help employees get professional certifications, he said.

Working weekly overseeing the Care Center’s showers, Whetstone said he wanted to do more for the homeless population.

“You wouldn’t even know [many were homeless]. It was just something that had happened, and it caused them to be homeless, but they’re still trying to work their way out of that, so we’re just hoping that we can be that extra help, that extra step,” Whetstone said.

In addition to Lawson State and Faith Chapel, Whetstone has also partnered with numerous other organizations, including the Community Foundation of Greater Birmingham.

Opening his coffee shop is not Whetstone’s first experience with Titusville. He and his wife Jeanisha, with whom Whetsone runs Modern House, spent some of their early marriage there in an old family house, which has been in his family for more than 30 years.

“I was 20, she was 18, and that was an opportunity for us to live there rent free,” Whetsone said of he and his wife. “All we had to do was just pay for our utilities, so it gave us an opportunity to grow without…having credit, not having a livable wage, having to work two part time jobs to make it as a full-time job.”

“Titusville helped me grow up as a man,” he added.

In the process Whetstone has broadened his knowledge of coffee, such as the different tastes.

“I drank a cup the other day, just black, just to get that flavor…so I’m just trying to learn more about the industry, and the more I learn, the more I see different growth aspects of this company,” he said.

In 2019, he ran a series of pop-ups in Birmingham’s Ensley community, where he planned to open a brick-and-mortar store.

Jeff Huey, founder of Homewood-based Seeds Coffee and a business partner of Whetstone’s, encouraged Whestone to move the business to Titusville.

“I literally left Seeds in Homewood, and I went driving around here. I drove up and down on Sixth Avenue [South], back and forth, and then I saw one building up there to the left, and then I saw this one right here,” Whetstone said.

That building, now the Modern House, reminded Whetstone of a favorite restaurant of he and his wife’s in New Orleans, LA called Surrey’s Café & Juice Bar.

“It’s a shack house,” said Whetstone, of the small, simply-designed structure. “It’s just like [the Modern House building], but it stays slamming-packed, and it’s like one of those local spots. If you’re not from that area of New Orleans, you may not know about it, unless somebody shared it with you. And when it’s shared with you, you’re gonna go every time,” Whetstone said.

Whetstone, 35, grew up in Fairfield until third grade before moving to Hueytown, where he first met his wife and graduated from Hueytown High School. Whetstone is the son of Troy Whetstone Sr., a former aviation expert, and Patricia, a former administrative employee of the Buffalo Rock Company, and has one sister, Kimberley.

Whetstone is also owner of Aircraft Cleaning Solutions, an aircraft detailing company he founded in 2010. Whetstone said he was brought into the business by his father following the economic downturn in 2008.

“I liked the jets. I liked the atmosphere, the business that I was seeing, and we started the company.”

Realizing he wanted to know more about aviation, Whetstone he took classes at Lawson State, enough to get into Embry–Riddle Aeronautical University in Daytona Beach, FL, where he graduated with a bachelor’s degree in aviation management.

Aircraft Cleaning Solutions was originally a “hustle” that grew into a career, Whetstone said. Through some shrewd business moves, quality of work,’ it was immediately successful,” Whetstone said.

Modern House is a chance for Whetstone to express his entrepreneurial spirit through providing a community service, he said.

“With me being an entrepreneur, just having that mindset…seeing a void and fulfilling it.

Modern House Coffee Shop is located at 422 Sixth Avenue S and is open from 6 a.m. to 2 p.m., Monday through Friday.