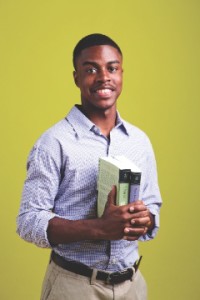 BIRMINGHAM, Ala. – Justin Woolen, a senior at Holy Family Cristo Rey Catholic High School, has been  named a Class of 2014 Super Student by Birmingham Magazine. He is featured in the August issue.
The article, on area newsstands now, has individual profiles of 20 Birmingham area Class of 2014 seniors. Since 2010, Birmingham Magazine has reached out to area high schools, asking high school guidance counselors and other professionals to nominate an outstanding boy and girl from the rising senior class.
“We ask schools what makes these students so outstanding – not only their GPAs, which are typically very high, but also who they are and what they do outside of their academic lives,” said Carla Jean Whitley, managing editor of Birmingham Magazine. “Our editorial staff then reviews the entries and selects the 20 students.”  As a junior, Woolen made academic honors, served on the school Student Government Association and was a point guard on the boy’s basketball team. He also worked one day a week at Collateral Holdings Ltd, filing and shredding documents as part of the school’s Corporate Internship Program.
Justin said he is thankful for the experience, adding working around accountants led him to eliminate that as a career choice. He credits Holy Family Cristo Rey for introducing him into broadcasting, as he made a highlight video for the school. Justin plans to major in communications at Auburn University.
In his profile, Justin says transferring to Holy Family Cristo Rey for his junior year last fall allowed his academics to soar. He had a perfect 4.0 GPA last year.
“I came over (to Holy Family) with an ambition to get stuff accomplished, because I realized that my first two years of high school, I didn’t take them as seriously as I should have.”
In addition to being in the August issue, Birmingham Magazine is airing a video profile of each Super Student during the month of August. Justin’s video will go live on Aug. 22. The videos are at www.Bhammag.com.

Located at 2001 19th St. in Ensley, Holy Family Cristo Rey offers a high-quality college preparatory education that is affordable and in a safe environment for students. Students work one day a week at 80-plus businesses across metro Birmingham, gaining valuable workplace experience that pays off in adulthood. The 30 graduates of 2013 received a combined $2.34 million in scholarships, a school record. For more information on Holy Family, visit www.hfcristorey.org or call (205) 787-9937.