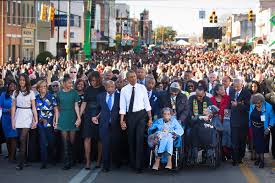 While standing in Selma, Ala. on Saturday, March 7 at the foot of the Edmund Pettus Bridge, I was overcome with heartfelt gratitude as I listened to Governor Robert Bentley, Congresswoman Terri Sewell, Representative John Lewis and President Barak Obama’s powerful, thought-provoking messages to a crowd of approximately 20,000 citizens gathering to commemorate the 50th anniversary of the Bloody Sunday March. That pivotal march in 1965 changed the United States government and the world at large.

President Obama paid tribute to the unselfish acts of courage shown on that dark day in history honoring the more than 600 peaceful protesters from that year who consisted of people of all races and walks of life, young and old, that were severely beaten and even several killed. Their endurance in the fight for all to have the right to vote helped make possible the Voting Rights Act of 1965.

There are three highlights from Saturday’s commemoration that I will always cherish as an American citizen and as a person that holds an elected office:

As an American citizen, I was reminded of the responsibility I share in helping to make this nation become a more perfect union, and I am challenged to never forget the awesome price paid for my civil liberties by those who came before me. As an elected leader, I was encouraged to continue to stand up for what is right. To not give up in the face of adversity, and to keep on being a resounding voice for socio-economicadvancement and equal opportunities for the people I humbly serve.