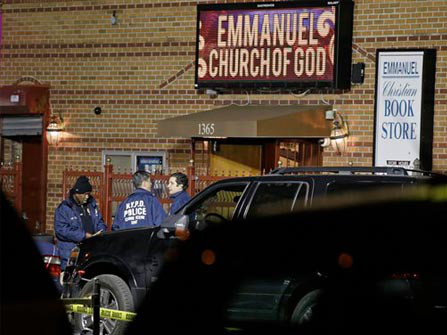 NEW YORK (AP) — A dispute outside a New York City church where a funeral was taking place triggered a shooting that left two people dead and four others injured, police said.

Authorities said 15 rounds were fired at about 8:30 p.m. Monday outside Emmanuel Church of God in Brooklyn’s East Flatbush neighborhood, where mourners had gathered for the funeral of a 38-year- old man who died of natural causes.

Police believe there were multiple shooters. They said shots were fired from in front of the church and from the crowded church. It was not known how many bullets hit the church.

Several cars sped away after the shooting and no arrests have been made. Police said a silver vehicle seen near the church was stopped in a different Brooklyn neighborhood.

City Councilman Jumaane Williams, whose district includes East Flatbush, said he planned to join Brooklyn Borough President Eric Adams at an anti-gun rally near the church on Tuesday to speak out about the need for measures to combat senseless acts of violence.

He told WABC-TV that the shooting was a “reckless” abandonment of life.

“If we can prevent retaliatory shootings from this particular shooting I think we will have something positive to talk about,” he said. “My hope is that the law enforcement will be able to do their job and hold the shooters accountable.”