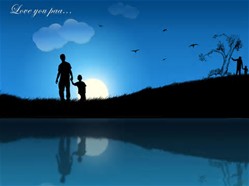 The specific details of why I was being sent out to the backyard after dark are unclear. I’m pretty sure that I had left something there that should not have been.  However, I distinctly remember being afraid of the dark.  The dark was the place where all of the scary things resided. The imaginary monsters hung out there. All of the bad stuff happened in the dark. Yet, I was being sent out to retrieve whatever this unimportant thing was. I couldn’t refuse because that was not an option in my parent’s household. After enduring this terrifying ordeal of running into this pit of blackness and back inside, I’m sure I had some minor meltdown that had probably started long before my brief trek into darkness. My father took this opportunity to tell me something that would linger in my heart and mind throughout my life. He said to me that I never had a reason to be afraid as long as he was around.

What a powerful thing to say to a little girl! Even more powerful is a life lived proving it again and again.  I took comfort in that knowledge that night and have lived confidently in that same knowledge throughout my life.

In order to provide me with that kind of peace, my dad had to be the one to face challenges head on. He had to overcome the difficulty of an absentee father. His father was not around to instill in him those things that a father should provide. He grew up in his grandmother’s home with very little in the way of finances but more than enough love to push him to great things. Because of this, he decided to be something different than what he had experienced and became very active in the lives of his children. He didn’t miss school events and even showed up at times when we didn’t expect to see him. I remember being teased by a friend in high school about how my Dad always wore a suit and tie to everything, even the school football games. What my friend missed was the fact that he was present, always.

My parents had rules and they expected us to be obedient and respectful. He never raised his voice and never used threats towards us. Yet, we never had any confusion about who headed the household.  I never remember being punished by my Dad but I’m sure my brothers have a different story to tell. I’m pretty sure that had less to do with me being his only daughter and more of me being an ideal daughter. But, Dad doled out punishment as necessary. He was a very patient man and used his brains to teach us. Usually, when one of us was punished, all of us learned the intended lesson so there were very few repeat offenses.

He intentionally exposed his children to as much of the country as possible. Every summer meant a road trip somewhere. We would usually drive the family car, loaded with all of the kids and packed lunches, near and far. Our love for travel was Dad-given. Our travels showed us that our country was bigger than our little community in southern Greene County. There was so much more to see, learn and do.

There were so many other challenges Dad has faced throughout his life. Challenges, in a broader arena, that aided me in living fearlessly in this world. He was beaten and jailed during the Civil Rights movement. He became the first African American Sheriff of Greene County, Alabama. He has been a Baptist Pastor for more than 50 years. However, I’m sure being a father has been one of the greatest challenges of his life. Not only did he provide peace and comfort for a scared little girl, he also had to be the example so that I could learn to be just as strong while facing my own challenges outside of his presence. An arduous task for anyone responsible for the lives of little people who at times are completely dependent on someone else, but specifically difficult for one who did not have a personal example of what a father should be.

As a testament to his greatness, there is no challenge too difficult for me to face. Call it confidence (or whatever you like), I got it from my Dad.

And even though I still don’t like the darkness, I’m not afraid.

Angela Gilmore is a freelance writer and educator living in Nashville, Tennessee. Her father, Dr. Thomas E. Gilmore, resides in Birmingham, Alabama. He continues to pastor and is active in the local community.