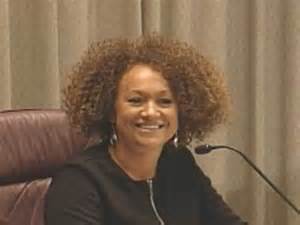 NEW YORK (AP) — The woman who resigned as head of a local NAACP branch after her parents said she was white said Tuesday that she started identifying as black around the age of 5, when she drew self-portraits with a brown crayon, and “takes exception” to the contention that she tried to deceive people.

Rachel Dolezal said Tuesday on NBC’s “Today” Show that some of the discussion about her has been “viciously inhumane.”

Dolezal carefully constructed a life as a black civil rights activist in the last decade in the inland Northwest.

She has resigned as president of the Spokane, Washington branch of the NAACP, lost her position as a part-time African studies instructor at a local university, lost her job as a freelance newspaper columnist and become the subject of a probe by the city Ethics Commission.

The furor has touched off national debate over racial identity and divided the NAACP itself.

Dolezal, a 37-year-old woman with a light brown complexion and dark curly hair, graduated from historically black Howard University and was married to a black man. For years, she publicly described herself as black and complained of being the victim of racial hatred in the heavily white region.

The uproar that led to her resignation began last week after Dolezal’s parents said their daughter is white with a trace of Native American heritage. They produced photos of her as a girl with fair skin and straight blond hair.

“I really don’t see why they’re in such a rush to whitewash some of the work I have done, who I am, how I have identified,” she said.

Asked when she started “deceiving people,” she replied, “I do take exception to that.”

Shown a photo of herself with a much lighter complexion in her youth, she said: “I certainly don’t stay out of the sun.” But she added that “I also don’t … put on black face as a performance.”

“I have a huge issue with black face,” she said. “This is not some freak ‘Birth of a Nation’ mockery black-face performance. This is a very real, connected level. … I’ve had to actually go there with the experience, not just the visible representation, but with the experience.”

She said published depictions described her first as “transracial,” then “biracial,” then as “a black woman.”

“I never corrected that,” she conceded, adding that “it’s more complex than being true or false in that particular instance.”

Dolezal said that she told people that a black friend was her father because that’s how she thinks of him.

Her sons are supportive, she said: One told her he views her as culturally black and racially “human.”