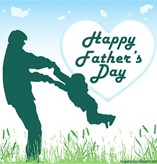 What Is a Father in Today’s Society?

With Father’s Day rapidly approaching I started pondering who really is a father and what the difference is between a father and a Daddy, so I did the only thing I knew to do to get a semi politically correct answer, I Goggled it.  What I discovered was amazing:  A father has to actually donate his sperm for the child to be conceived and a daddy is the informal word used for father or is used as a term of endearment.

I found this to be somewhat perplexing since I was reared by my stepfather but never called him daddy.  My father who donated his sperm to create us did everything short of killing my brother and me yet we refer to him as “Daddy”.  I will go to my grave giving my stepfather the respect due a father.  He did everything including working two and sometimes three jobs to provide for three children that he inherited when he married my mother. So to all the hard working men who have sacrificed and reared children that they didn’t donate their sperm to create, HAPPY FATHER’S DAY!

Now, for all the single mothers acting as both parents such as myself I commend you!  I know how difficult and frustrating it can be rearing children alone with and without a support system. I know what it’s like to work two jobs just to keep the essentials in the house. To you I say, HAPPY FATHER’S DAY!

Now for the more complicated and often delicate matter of two mommies or two daddies let me express that I don’t weigh in on this subject for or against.  The way I view it is if there is a child with no parents what is the problem with having gay or lesbian parents?  As long as they provide a loving household and the upbringing that will produce a productive well functioning member of society, to them I say HAPPY FATHER’S DAY!

Now if you have gone over and beyond what the court has ordered you to do and you spend as much time with your child/children as you can or maybe you’re behind on your payments, but you still provide what you can in a timely manner and still are an active part of your child/children life, HAPPY FATHER’S DAY!

If you are a sperm donor that hasn’t spent more than six months with your child/children whether it was all at one time or in increments you don’t qualify for a FATHER’S DAY well wish.  If you are court ordered to pay child support and you have ignored this order you should already know you don’t qualify. If you haven’t tried to make some type of provisions for your child or children you are just that a sperm donor. Last time I checked they didn’t have an official holiday for you.

To all of the true fathers no matter what capacity you may be in I wish you a VERY HAPPY FATHER’S DAY!