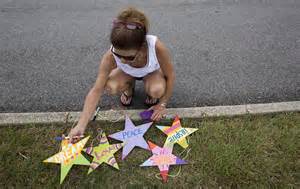 LAFAYETTE, La. (AP) — One was a talented artist who sang in an all-female band and planted trees to beautify her neighborhood. Another was studying to be a radiology technician and looking forward to a future with a longtime boyfriend.

Jillian Johnson, 33, and Mayci Breaux, 21, were shot and killed last Thursday while watching the movie “Trainwreck” at The Grand 16 movie theater in Lafayette, leaving stunned friends and family questioning how two lives off to such promising starts could end so tragically.

Police say John Russell Houser, 59, stood up about 20 minutes into the movie and began firing before ultimately taking his own life.

Funerals for both women were scheduled for Monday.

Friends of Johnson, like Pudd Sharp, remembered her as a woman of talent and warmth. At an event to remember the victims he pointed out people wearing T-shirts she designed and described her as a funny, talented and welcoming woman. He said she was a “tastemaker,” the type of person that if you showed up at a club or restaurant or an event and she was there, you knew you were in the right place.

“She was just a really nice person, just in the horribly wrong place at the wrong time,” Sharp said.

Hundreds of mourners turned out for a vigil Saturday night, wearing T-shirts and holding signs with the words “Lafayette Strong,” which has become a rallying call in the wake of the shootings. Organizers played a recording of a folksy ukulele-and-voice song recorded by Johnson, who also played in a local band called The Figs.

Joseph Shelvin, 66, was a neighbor of the Johnson family. He said Johnson spruced up the neighborhood by planting crepe myrtle trees.

“The trees are blooming. She helped motivate people to do things. She got together about 100 kids from UL (University of Louisiana at Lafayette), we all picked up trash, put it to the street, and the city picked it up. It was amazing to see the yards were absolutely clean,” Shelvin said.

Breaux, who was from Franklin, Louisiana, was studying to be a medical radiology technician at Louisiana State University-Eunice and was expected to start next week doing clinical work at a hospital in Lafayette — the same hospital she was taken to Thursday after she was fatally shot.

In Franklin, an old town in Louisiana’s sugar cane country, hundreds of mourners attended visitation services for Breaux Sunday evening. Louisiana Gov. Bobby Jindal also made an appearance at the funeral home, but did not speak with media.

Anne Oestriecher, a 52-year-old cousin of Breaux said she had been dating her boyfriend Matthew Rodriguez for years before the two went to the movie theater Thursday. Rodriguez was shot in the chest but survived.

“They were planning their life together; they were ready to get out of school and get married and start a family. And she and Matt went to the movies,” said Oestriecher who spoke with tears on her face. Breaux had a younger sister and older brother and “tons of cousins” Oestriecher said, adding she would miss Breaux’s smile the most.

“She was the quiet one; she was the one, everybody is running around like crazy, she would sit there quietly and just be enjoying everybody and enjoying everything and then suddenly bust out laughing because somebody said something that made her smile,” she said.

The Franklin-Banner Tribune reported that Breaux was voted “Most Beautiful” by her senior class and was crowned Carnival Queen in 2012. She also worked at Coco Eros Fashion Boutique in Lafayette for about a year where she was remembered as a cheerful woman with a generous smile for customers and those with whom she worked.

“Everyone at the store would remember her,” said Thea St. Germain, 24. “She was that kind of person to leave an impression on you.”