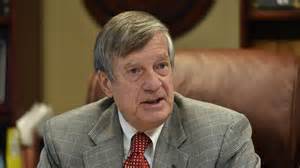 By  Mahari A. McTier

According to reliable sources, political experts, and some community leaders, current Jefferson County Commissioner Jimmie Stephens can be beaten by former Jefferson County Sherriff Democratic nominee Wallace Anger if he ran for the District 3 seat.  This may be shocking to hear for some, but the numbers tell a potentially different story.  What’s even more surprising is that Wallace Anger is an African-American who has a high enough favorability to win in a majority white district.

Who is Wallace Anger?
Wallace Anger is a 30 year law enforcement veteran and graduate of Miles College. He currently serves as a deputy in the Jefferson County Sherriff’s Office. He also worked for the Birmingham Police Department for 20 years before becoming a deputy Sheriff.
Reliable sources say that Wallace Anger has put his exploratory committee together to look into a future run for the Jefferson County Commission (District 3) seat against incumbent Jimmie Stephens. He is actively talking with advisers and grass root community leaders to test the viability of his candidacy and the response so far, according to sources, has been overwhelmingly positive. Some have gone so far as to say that he is actively putting his political organization together.

Why some feel he can win?
If you have ever had the opportunity to engage Anger you will agree with me and with many that his presence is one of confidence and self-assurance. He exudes an indescribable sense of firmness and compassion rolled into one. His more than 30 years of law enforcement service has taught him discipline and utmost professionalism. Wallace Anger has uniquely found a way to transcend race, and I witnessed him as a candidate move amongst all socio-economic classes and races with comfort and ease.
I shared this, because the qualities, both tangible and intangible, of a candidate are important when running for public office. They are even more important when running against an incumbent.
If you understand politics, it’s all about the numbers. What has taught me in my 20 years as a student of politics, is that numbers rarely lie. Political campaigns are like heavyweight fights where any fighter can be beat on any given night by the right opponent. Case in point, Mike Tyson vs. Buster Douglas. Before fighting Buster Douglas, Mike Tyson was viewed as unbeatable. Buster Douglas watched film and knew how to fight Mike Tyson.  He knew his weaknesses and took advantage of them. He ultimately embarrassingly defeated the champion of the world. In politics you have to study the numbers to strategize on how to win. Among the many upcoming races the experts are predicting this potential race as a heavyweight bout for the ages.
Let’s look at Anger’s race against incumbent Sherriff Mike Hale in 2014.  Yes, he was defeated, but what did the numbers tell us? To have run against a relatively strong incumbent, he did surprisingly well. What the numbers revealed to the experts was that his votes came from a very diverse demographic, both race and political affiliation. According to Anger’s staff, he received as a Democrat 15 percent of the Republican vote of which were majority white. What was even more surprising is that Sheriff Mike Hale received 16 percent of the Black vote. If Mike Hale had not received the 16 percent Black vote, it would have been a much closer race.
Let’s fast forward and look at a future race between Anger and Stephens.  The district is currently 45 percent Democrat, 35 percent Republican, and 20 percent Independent. After crunching all the numbers, the experts say that if Anger can get 15 percent of the Independent vote and 5 percent of the Republican vote, he could win. There is viability to their rationale, because I personally feel that Commissioner Stephens would not get any Black votes and Anger showed in his last election that he can win over some Republicans.
We must take into consideration that any viable candidate would have an opportunity to beat Commissioner Jimmie Stephens. Many feel that it’s about results and not excuses on why Jefferson County is still facing some of the same issues it faced when he was elected and they are still under a 20 plus year discrimination court order that he has not addressed.
Remember, running for office is like a heavyweight fight, you have to figure out how to fight your fight and win. I agree with the experts that say if the numbers stand true, Anger could possibly be the next District 3 Jefferson County Commissioner.