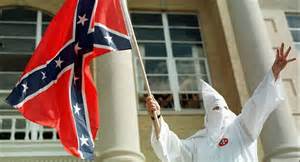 “They took our flag, so be it. They’re taking our heritage from us. They’re taking the freedom out of America.”—William Bader, an imperial wizard of the KKK.
Hatred hit the streets of Columbia, South Carolina over the weekend as members of the Ku Klux Klan yelled racial slurs to protest the removal of the Confederate flag on the statehouse grounds.
It was an ugly scene that underscored the deep racial divide in South Carolina, where white and Black residents live within miles of each other but are worlds apart when it comes to issues of race, immigration, and multi-cultural understanding.
The incendiary rhetoric by the KKK reminds us that racism still permeates our society and while many intelligent, well-meaning Americans — both Black and white –live together harmoniously, there are still white supremacists who are raising a new generation of young racists.
William Bader, a member of the KKK who attended the rally in Columbia, told reporters that he’s tired of having his freedoms infringed on by African-Americans and liberal lawmakers. He also told the media that some KKK members wanted to demonstrate last weekend by burning a church while dressed in the KKK’s signature white hoods.
During the rally, members of the KKK shouted racist epithets at Black Educators for Justice, a group of Black counter-protestors and white supremacist Steven Johnson, who waved a Nazi flag during the protest, told journalists that he’s worried about the state of America simply because of African-Americans.
“The Blacks have been out here attacking people, stealing people’s property, taking their flags,” Johnson told reporters. “I’m scared of what my family’s about to grow up with.”
The KKK demonstrators talked about how their freedoms are being violated and they desperately want to “take back” their country. But from whom? Who exactly is highjacking their country and how?
Last week, South Carolina lawmakers made history by voting to remove the Confederate flag in the statehouse grounds. It was the right decision and long overdue.
Many Southern whites believe the Confederate flag stands for the fight for “state’s rights,” and pays tribute to Southern history. But in reality, the flag is a longstanding symbol for racism since the Confederate states seceded from the Union to fight a Civil War based on whether or not slavery would remain in place. And what an archaic symbol: flying a battle flag on state property to remind Americans that rebel soldiers loyal to Robert E. Lee lost the war? It’s past time to move on.
The heated debate over the Confederate flag intensified after Dylann Roof, a self-proclaimed white supremacist, shot and killed nine Black parishioners inside Emanuel AME Church in Charleston, South Carolina while they were holding an evening prayer service.
The removal of the Confederate flag in Columbia was a noble act by lawmakers and a largely symbolic gesture that, unfortunately, will not change some racist attitudes.
The KKK rally was a stark reminder that racist mindsets can be everlasting and white supremacists like Bader and Johnson, will never accept the fact that multiculturalism is the new normal and America is becoming Blacker and browner. By census projections, whites will no longer be the majority just a few decades from now.
The KKK doesn’t want to hear that. I believe the removal of the flag will actually exacerbate existing racial tensions in South Carolina and across the country, particularly when ignorant people like Donald Trump, a 2016 presidential candidate, calls Mexican immigrants “rapists,” giving hate groups like the KKK a heightened sense of purpose and legitimizing their racist rhetoric.
South Carolina Gov. Nikki Haley asked South Carolina residents to stay away from the rally so the KKK wouldn’t draw any more attention.
“Our family hopes the people of South Carolina will join us in staying away from the disruptive, hateful spectacle members of the Ku Klux Klan hope to create over the weekend and instead focus on what brings us together,” she said. “We want to make the Statehouse a lonely place for them.”
I disagree with Haley. Black residents correctly showed up in Columbia to protest the racist protestors. I don’t think we can afford to ignore racism, Silence has never spurred social change.
What do you think?