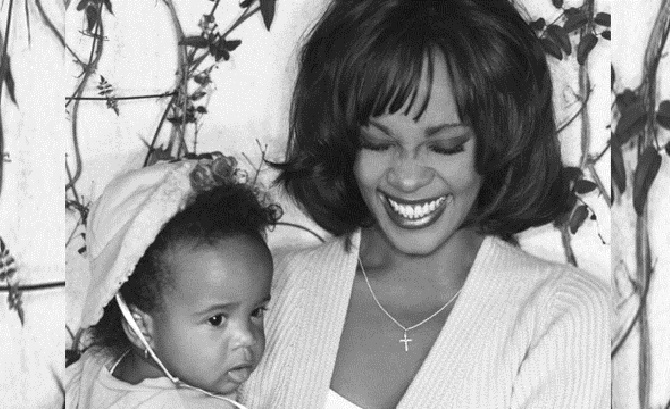 ALPHARETTA, Ga. (AP) — R&B singer Bobby Brown emerged from the funeral of his daughter Bobbi Kristina Brown, staring toward the ground before lifting his head up and briefly gazing at the sky.
Sporting a black dress shirt, the grieving Brown was one of the first to exit the tension-filled private service for Bobbi Kristina on Saturday at the St. James United Methodist Church in Alpharetta, just north of Atlanta. Twenty-two-year-old Bobbi Kristina was the only child between Brown and the late megastar singer Whitney Houston.
Bobbi Kristina died in hospice care July 26, about six months after she was found face-down and unresponsive in a bathtub at her town home.
Several celebrities showed up for the funeral including filmmaker Tyler Perry, Grammy-winning R&B singer Monica and Atlanta Mayor Kasim Reed.
In the middle of the service Bobby Brown’s sister Leolah Brown walked out of the church and spoke to reporters gathered outside. She said she was angry because Pat Houston was speaking at the funeral. Pat Houston is the sister-in-law and former manager for the late Whitney Houston.
“I told her that Whitney is going to haunt her from the grave,” Leolah Brown told reporters outside the church.
She suggested that the feud between the Houstons and the Browns was far from over.
“It’s just getting started,” she said before going back inside the church.
An email to the Houston family rep was not returned.
For years, there’s been a longstanding rift between the families of the young woman’s famous mother and father. Bobby Brown briefly appeared at Houston’s funeral three years ago, saying he and his children were seated but asked repeatedly to move. Brown said he left because he didn’t want to create a scene, but was upset.
Bobbi Kristina’s death was grimly similar to the way her mother had died three years earlier.
Houston’s assistant found the singer’s lifeless body face-down in a foot of water in her bathtub at the Beverly Hilton Hotel just before the Grammy Awards in 2012. Authorities found prescription drugs in the suite, and evidence of heart disease and cocaine in her body, but determined her death was an accidental drowning.
Bobbi Kristina was found in the town home she shared with Nick Gordon, an orphan three years older, whom Houston had raised as her own. Bobbi Kristina referred to him as her husband. A police report earlier this year described the incident as a drowning, and authorities are investigating her death.
Relations between Gordon and other relatives have soured over the past few years, especially after Bobbi Kristina was hospitalized. A protective order barred him from being within 200 feet of Pat Houston. And a feud erupted over whether Gordon could visit Bobbi Kristina while she stayed in the hospital.
Fulton County District Attorney Paul Howard said he and his office are interested in reviewing the investigative file to determine whether any charges will be filed.
Leolah Brown said she believes Gordon was involved in the death of her niece.
Lawyers for Gordon declined to comment.
Bobbi Kristina was raised in the shadow of her famous parents’ hugely public life.
She appeared alongside the couple in 2005 on the Bravo reality show “Being Bobby Brown,” which showed her parents fighting, swearing and making court appearances. She attended award shows with her mother and father, walked red carpets with them and sang in Central Park with Houston as adoring fans watched.
Houston and Brown were married 15 years. Their tumultuous relationship ended in 2007.
On Saturday, she was remembered in a private service. A hearse carrying Bobbi Kristina arrived nearly three hours ahead of the service. Four men dressed in black suits carried the coffin into the church.
Eight police motorcycles escorted three stretch limousines, carrying mourners to the church in Alpharetta ahead of the service. A procession of dozens of cars followed.
Security was heavy outside the church. About 75 members of the media stood behind a barricade at the entrance of the church parking lot, while more than two dozen onlookers were just a few feet behind them.
Alpharetta police say they were assisted by more than a dozen state troopers to manage traffic and shut down lanes to accommodate parking around the church where the service was being held.
Bobbi Kristina was the sole heir of her mother’s estate. She identified herself on Twitter as “Daughter of Queen WH,” ”Entertainer/Actress” with William Morris & Co., and “LAST of a dying breed.”
She told Oprah Winfrey shortly after her mother’s death in 2012 that she wanted to carry on Houston’s legacy by singing, acting and dancing. But her career never took off.
In her short life, Bobbi Kristina became a social media sensation, sending more than 11,000 tweets and attracting 164,000 followers.