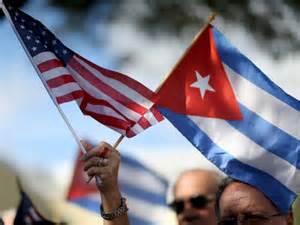 WASHINGTON, D.C. – Congresswoman Maxine Waters (CA-43), Ranking Member of the Financial Services Committee, issued the following statement in honor of the flag-raising ceremony at the U.S. Embassy in Cuba:

“I am especially proud and hopeful today as the American flag was raised over the U.S. Embassy in Havana for the first time in over 54 years. As a long-time advocate of improved relations with Cuba, who has traveled to the island several times; witnessed the desire of many Cubans to improve relations with the United States; and visited their schools, hospitals, and a major university; I believe that working together will be beneficial to both Cuba and the United States.

“As the Chair of the Congressional Black Caucus (CBC) in the 105th Congress, I organized the first of several congressional delegations for CBC members to Cuba.  We met with President Fidel Castro, other Cuban officials, the Chief of the U.S. Interests Section, and several dissidents and independent journalists.  We also donated more than 400 pounds of medical supplies to the Martin Luther King Center in Havana, which is run by the Baptist Church, for distribution in the community.

“Today’s flag-raising marks an end to the backwards policy of isolation and marks another step towards creating strong diplomatic and economic relations with our neighboring island. I trust that this historical next step will help further normalize relations between our two great nations and facilitate enhanced cooperation in other aspects of our relationship, such as trade, travel, and cultural exchange.  I will continue to fight for an end to the crippling embargo and look forward to the day when fear and mistrust are replaced by friendship and cooperation.”