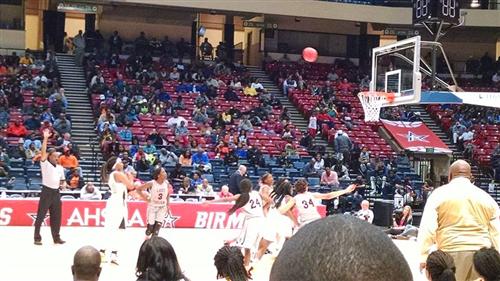 A parade to celebrate the Wenonah High School girls’ basketball team’s third straight state victory will be held on Saturday, April 9 at the school, 2916 Wilson Road.

The parade will start at 9 a.m., go through the community and end at the school stadium. The route is as follows:

Make a left onto Cedar Avenue toward Jefferson

Make a left onto 40th Street

Make a left onto Viola toward Wilson Road

Grammy-nominated singer and songwriter Alvin Garrett will be the parade grand marshal. Following the parade at about 10:30 a.m., Garrett will perform his hit single “By Myself” at the stadium. Roscoe Robinson and Wenonah High graduates Sweet Charlotte of Wellington’s Bistro (Class of 1973) and rapper Javan Ishman (Class of 2006) will also perform. Comedian Calvin “Big C” Benford will serve as emcee. There will also be a DJ.

The event is free. Alumni and church groups are invited to set up tents and tables at the school stadium. Wenonah alumni groups interested in participating should contact Jerelle Hendon at 231-1700, starting the week of April 4. (The school is currently closed for Spring Break, March 28-April 1.)

Wenonah High, under the leadership of Coach Emanuel Bell, defeated Tuscaloosa’s Central High 58 to 33 for the state win during the state finals at the BJCC on Saturday, March 5.

Following the win, news media started calling Coach Bell a dynasty maker. He dismissed the comment, giving the credit to the students and his coaching staff.

Principal Regina Carr-Hope is proud of everyone, too.

“We are very excited about what has happened,” Carr-Hope said. “The win not only honors our students but it also honors the entire City of Birmingham and the school system. We are a school where our message is: ‘Wenonah High School –  Where Champions are Made and Knowledge is Explosive.’ These students have helped demonstrate just that.”

“We will celebrate them as the champions that they are,” said Carr-Hope.

“We support them and appreciate their hard work and dedication to the sport,” Dr. Gacutan said. “We also appreciate the commitment and support of the Wenonah coaches and staff.”

“It’s important that we celebrate this amazing accomplishment.”

News of the Lady Dragons’ third straight state basketball went national earlier this month. Congresswoman Terri Sewell was on the floor of the U.S. House of Representatives on Wednesday, March 16, when she congratulated the team on its victory.

“I am incredibly proud to extend congratulations to the Lady Dragons on winning their third consecutive Alabama Girls (5A) Basketball Championship,” Sewell said. “As we celebrate Women’s History Month – clearly these young ladies have blazed their own remarkable path both athletically and academically as student athletes, and are to be commended.”