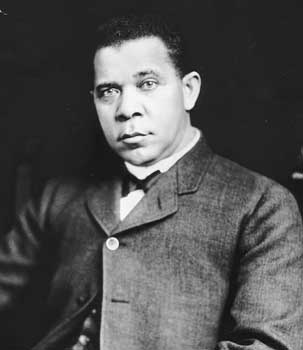 They came from about a dozen states and a variety of nations, religions and cultures for “The Inaugural National Forum on Race” as part of the 100th anniversary celebration of the life of Booker T. Washington, the first president of Tuskegee University.

No place in America has been more effective at dealing with race than Tuskegee during Washington’s tenure, said Johnny Ford, mayor of the city where the university is located.

“If you think that race is an issue now, it was more of an issue back then,” Ford said. “But Booker T. Washington had a way of rising above race and the difference between blacks and whites, even Native Americans. He had a way of blending and changing the system from within and from without.”

Washington founded Tuskegee in 1881 and served as its first president until his death on Nov. 15, 1915.

On Sunday, about 50 people took a modest first step to address issues related to race in the forum at the Tuskegee Airman National Park Auditorium.

Dr. Stuart Weeks, founder of The Center for American Studies at Concord, MA,

said race relations would be no problem if people kept their eyes closed.

The conversation will continue in other places, including Charleston, S.C., Philadelphia, Pa., and Los Angeles, organizers said.

“We purposely came here to the spiritual home, in many people’s eyes, of my black brothers and sisters to do this here,” Weeks said. “This is the inauguration of the National Forum on Race: Keeping the Faith.”

Weeks said Washington’s spirit is alive and well. He said the educator, author, orator, and advisor to U.S. presidents would say society today could do a lot better in race relations.

“I think he would say there’s still room to be better,” he said, before quoting Washington. “Tuskegee was a place where without racial bitterness, but with sympathy and friendship, with the aid of the state, with the aid of black men and white men, with Southern help and Northern help, we are trying to assist the nation in working out one of the greatest problems ever given to men to solve.”

Tuskegee art professor Dr. Ronald S. McDowell said the event was the first brush of painting a brighter picture in race relations. He noted the diverse group that included persons from various nations, religions and cultures.

“Booker T. Washington said it is better to light a candle than to curse the dark and that’s what we’re trying to do here,” McDowell said.

Robert E. Smith, 75, former editor of the Southern Courier, a weekly newspaper founded in Montgomery to cover the Civil Rights Movement, said he is not satisfied where race relations are today.

“It’s all white versus black – white employers with disregard for black employees,” he said. “I’ve seen many attempts to try to get a fresh start at this and it’s all commendable. But as an older person, I guess, I’m a little frustrated.”

But, Smith said, it has to start somewhere.

Howard Comen, from Charleston, S.C., said he was thrilled listening to the heartfelt conversations. However, the message couldn’t stop in that auditorium, he said.

“What we do here isn’t going to make a bit of difference unless it gets out into the general public,” he said.