The Birmingham Business Alliance announced 75 projects with 2,014 jobs and $586.5 million in capital investment in 2016.

The BBA unveiled its annual report at its 2017 Regional Economic Growth Summit this morning. The meeting also outlined details of the new Innovate Birmingham initiative and updated the progress Birmingham is making compared to 14 peer cities in 12 key indicators.

“Manufacturing’s sustaining us,” BBA CEO Brian Hilson said. “As you see, the vast majority of the jobs and in particular the investment is driven by manufacturing.”

Hilson said he expects manufacturing and distribution will continue to play a key role in the region’s economy. The future, however, is in growing through innovation with technology and knowledge-based industries.

“I think we made substantial progress in areas that don’t show up in the numbers for 2016,” Hilson said. “I’m talking about technology-based business growth. If you look at all of the things that we worked on during the year – and at the top of that list, of course, is Innovate Birmingham and the physical development of the Innovation District – but also the workforce development plans for Innovate Birmingham.”

Innovate Birmingham is an initiative that centers on the Innovation District surrounding Innovation Depot in downtown Birmingham. The groundwork has been focused on giving the district the electrical and fiber communications infrastructure necessary to accommodate future growth. On parallel tracks have been boosting the access to financial capital, developing needed workforce skills and recruiting like industries to the area.

“We’ve made progress in positioning Birmingham as a technology center that have only started to show up in a few of the company announcements – companies like Oxford Pharmaceuticals, Steris, Evonik and others,” Hilson said. “I think we’re really only on the cusp of what’s actually going to happen with our organic growth that is both in the Innovation District but also outside of it like Evonik is today.”

Hilson said he expects to see Birmingham continue to enjoy growth in areas like automotive parts and distribution but future growth will be in those industries identified in the Innovate Birmingham initiative.

Birmingham Mayor William Bell said Innovate Birmingham is getting the emphasis from the public and private sectors.

“I think the key is going to be the technology infrastructure that we’re working on through Innovate Birmingham,” he said. “We’re working with several consultant groups to make sure that every step that we take moves us in the right direction. The collaboration with the private sector as well as the governmental sector is yielding great benefits for us.”

Ray Watts, president of UAB and BBA chairman, said the community is harnessing what UAB, Southern Research and Innovation Depot have to offer in making Innovate Birmingham a reality.

“We want to create an opportunity, an environment for technology and knowledge-based economies to thrive here,” he said. “It is a movement and it’s a movement that has everybody involved in leading Birmingham working together and supporting it.”

Hilson said the latest metrics show Birmingham improved in nine categories, was unchanged in two and declined in one when compared to 14 peer cities throughout the country.

As for 2017, Hilson said announcements already made this year and other ones in the pipeline could make this a banner year.

“This could be our best year in quite some time,” he said. 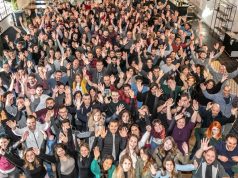