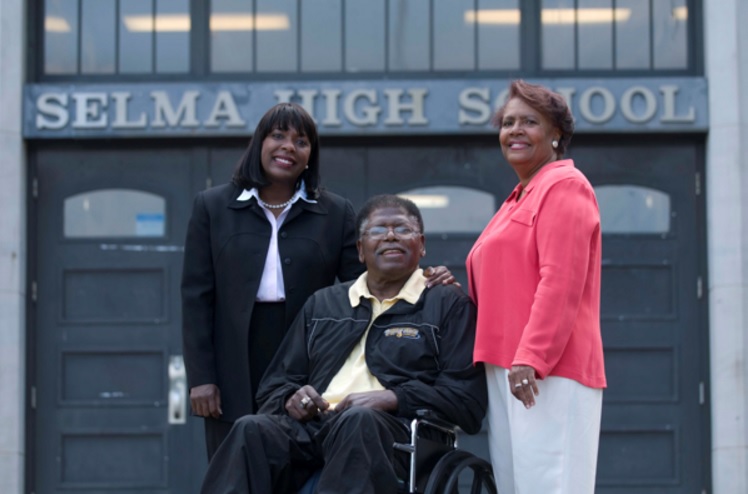 “My father was a devoted husband, a wonderful father, grandfather, brother, teacher, basketball coach and mentor to thousands of young people during his 36 year career as a coach and teacher,” said Rep. Sewell in a statement. “As the head basketball coach at Selma High, Coach Sewell led the Selma Saints to Area or State Playoffs 12 out of 19 years including two state runner-up finishes and two third place finishes in the Alabama Class 6-A High School state tournaments.”

Sewell continued, “Despite a series of strokes from 1988 to 2003, my father continued to live life with the same strength, grit and determination that he demanded of his players. We are so proud of his extraordinary life of exemplary sportsmanship and we are comforted by the knowledge that his legacy will live on in the many lives that he touched.”

A celebration of life service has been opened to the public. It’s scheduled for Saturday at 11 a.m. in the Selma High School Auditorium.

Andrew Anthony Sewell was born in Selma, Alabama on April 25, 1935.  He was raised by his mother, the late Edmonia Walters Acoff and his stepfather, the late Mose Acoff. His father was the late George Sewell.

Before there was Coach Sewell, there was “Bo Diddley,” a local star athlete who excelled in all sports. Sewell attended Selma public schools and graduated from R.B. Hudson High School in 1957. A basketball and football standout in high school, Sewell was named to All-City, All-County, and All-State in both sports.

Excelling in basketball, football, golf and track, Sewell’s athletic prowess, competitive spirit, determination and strong work ethic, earned him a four-year scholarship to Alabama State University in Montgomery, AL. Sewell received his bachelor’s degree from Alabama State University (ASU) in 1961 and went on to earn his master’s degree from ASU in 1971.

His athletic feats at Alabama State were legendary. Lettering in four sports (basketball, football, golf and track), Sewell was captain of the ASU Football team in 1960 leading them to a Collegiate Conference Championship in 1959 that earned him the “Most Outstanding Athlete” Award. The starting forward on the basketball team and Captain of the Golf team at ASU, Sewell was well-rounded and multi-talented.

Coaching was a natural choice for his profession. Coach Sewell began his coaching and teaching career at Council Training School in Normal, Alabama in 1961. There, he met the love of his life Nancy Gardner, the school’s librarian, who would become his bride in 1963. In 1966, Coach Sewell returned home to Selma to accept the head coaching position at his alma mater, R.B. Hudson High School, where he would coach until 1970.

‘Coach of the Year’

On the hills of integration and the consolidation of the black and white public schools in Selma, Sewell became the assistant basketball coach of the newly integrated Selma High School in 1970.  Not to be slighted, Sewell sued and won the right to resume his position as Head Basketball Coach at Selma High School— a position he took in 1977.

During his 19-year coaching career as Head Basketball Coach at Selma High School (SHS), Coach Sewell led the Selma Saints to Area or State Playoffs 12 out of 19 years, including two state runner-up finishes and two third place finishes in the Alabama Class 6-A High School state tournaments. He compiled an impressive record of 465 wins and 161 losses.

During his heyday, Sewell made Selma High history by putting together 7 back to back 20-game winning seasons during his first eight years as Head Coach and was voted High School “Coach of the Year” three times. While coaching was his profession, golfing was Coach Sewell’s weekend passion and obsession!  Sewell was an early trailblazer for African Americans in Golf. Coach Sewell started playing golf in the 1950’s as a caddy to earn extra money while in high school.  His early victories in caddy tournaments at the Selma Country Club earned him his first set of golf clubs.  His natural athletic abilities led him to become a “scratch” golfer.

From playing golf in college to semi-professional tournaments, Sewell soon earned a reputation during the 1970s as one of the leading golfers in the Southeast.  His playing successes lead to numerous first, second and third placements in golf tournaments all across Alabama, Tennessee, Mississippi, Georgia and Florida. Sewell’s impressive golfing career included winning over 90 trophies. His struggles and successes on the golfing circuit during the 1970s and 1980s paved the way for the likes of Tiger Woods.  Sewell’s outstanding coaching career at Selma High was cut short after suffering his first debilitating stroke in late December 1988.  Although he missed the rest of the basketball season that year to undergo intensive rehabilitation, Sewell was able to make a remarkable recovery through great strength and determination.

Ultimately, Sewell made the toughest decision of his life and decided to resign as Head Basketball Coach at Selma High School in 1989. He continued to teach math, coach golf and to coordinate the physical education program at SHS until his formal retirement from the Selma City School system in 1997.  Sewell was an active member of the Chesterfield Club, the 12 High Club, the Don Bosco Boys Club, and the Pride of the Alabama Elks Lodge 919.

Under the guidance of his beloved priest, Father Ziter, Sewell was a life member of Our Lady Queen of Peace Catholic Church in Selma, Alabama. In retirement, Coach Sewell still provided his wisdom from the sidelines. He continued to support his beloved Selma High Saints and was proud of their continued success.  Sewell went on to enjoy 13 good years of health before three additional strokes in 2001 left him wheel-chair dependent.

Despite his health challenges for the next 15 years, Coach Sewell continued to live life with the same strength, grit, faith and determination that he demanded of his players. He was supported and cared for by his loving wife Nancy, family members, and legions of his former players and students. Coach Sewell fought a good fight, he finished his course, he kept the faith and at the age of 81 he was called home to his eternal rest.

In lieu of flowers, the family encourages donations to be sent to: “The Coach Andrew A. Sewell Scholarship Fund” 705 King Lane Dr. Selma, Alabama 36701.