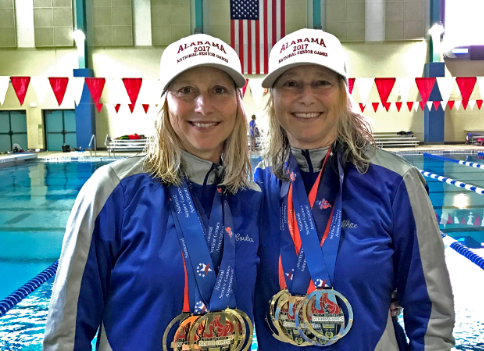 Abraham Manear laughed when people talked about him competing in swimming events at the 2017 National Senior Games. The Birmingham CrossPlex is just over the hill from his Ensley Highlands home but he thought he had too far to go to be ready for a return to competing in the CrossPlex pool.

The 55-year-old had grown up swimming for Birmingham Park and Recreation and was the first black product of park and recreation to earn a swimming scholarship, going to Howard University. But it had been 25 years since the graphic design major had raced in the water and a shoulder injury had him thinking he couldn’t measure up.

Birmingham hosted the Senior Games – the largest multisport event in the world for people age 50 and older—from Friday, June 2 to Thursday, June 15.

Manear’s return to the pool proved more productive than he thought as he earned a pair of bronze medals and three ribbons in his age group. He is among the local athletes who turned back the hands of time to compete and succeed in the National Senior Games.

Manear surprised himself as he earned five gold medals at a qualifying meet in Georgia. From there, he trained three times a week following his work shift to get ready.

“I got in that water and that love and that passion came up and I just started going for it,” he said.

A truck driver for P&S Transportation at U.S. Pipe in Bessemer, Manear got his Howard scholarship in breaststroke and it was like old times for him at CrossPlex. He earned bronze medals in 50-yard breaststroke and 100 breaststroke.

And he had fans there to support him.

“He had the whole section on the right-hand side,” said Martha Manear, his wife of nearly 11 years. “I met a lot of people who knew him when he was a coach. They just loved him. Everybody loves Abe.”

Also in swimming, Hoover’s Melissa White and her identical twin sister Melanie Coultas, of Gurley, Ala., were competitive swimmers while growing up in Mobile and nothing changed during the Senior Games.

“She actually set two national records,” White said of her sibling, who is older by 3 minutes. “She tied the one for the 100 backstroke and she broke the 50 backstroke. I got two firsts and four seconds and she got four firsts and one second. Something like that.

“We do different things,” the Trace Crossings resident said. “She’s a better sprinter, I think, and I did more of the middle distances and the butterfly. But when we swam head to head in the backstroke, she got the better of me.”

Coultas swam at Auburn University and then the sisters swam in some masters level events.

“We’ve been out of the pool a long time raising children,” White said. “Our kids got grown, we saw this was going to be in Birmingham and we thought we might give it a try.”

In other action, Buck Johnson had not played under the banner of Hayes High School Pacesetters since he led basketball team to back-to-back Class 4A state basketball championships in 1980-81 and 1981-82.

But Johnson, who went on to star at the University of Alabama and in the National Basketball Association, was a Pacesetter during the National Senior Games. A group of Hayes alumni asked him to join them in playing in the event at the Birmingham-Jefferson Convention Complex (BJCC).

While the team fell short of medal contention, the 1982 Alabama Mr. Basketball said it was a good experience.

“It wasn’t the main core guys who played when we (won state championships) at Hayes,” Johnson said. “I was kind of a pickup.  I came in to help them play.

“It was an eye-opener for us,” he said. “Now that we do have a better understanding, we’ll know how to prepare going forward, if we decide to keep it going. But it was a great experience. We had a great time.”

Despite losing before the medal round, Johnson garnered a bit of notoriety by getting a pair of slam dunks, one in pool play on Saturday and another on Monday.

The gold medal winners in the 70-74 age basketball division didn’t have the star power of a former NBA player but did have enough skill to snare first place.

Mike Madden’s Code Blue of Birmingham was made up of a group that learned how to work together.

“The ones we have may have played (in) high school,” said Madden, who lives between Irondale and Mountain Brook. “I played city league. We’re the motley crew. We’re the guys who loved to play the game and still love to play the game.”

The difference, Madden said, is Code Blue played in 11 tournaments in the past year and a half.

“We were ready,” he said. “We don’t have any big names but playing all those tournaments in neighboring states, we were able to hold it together better than most.”

The Hoover Defenders won the silver medal in the men’s 50-54 age division.