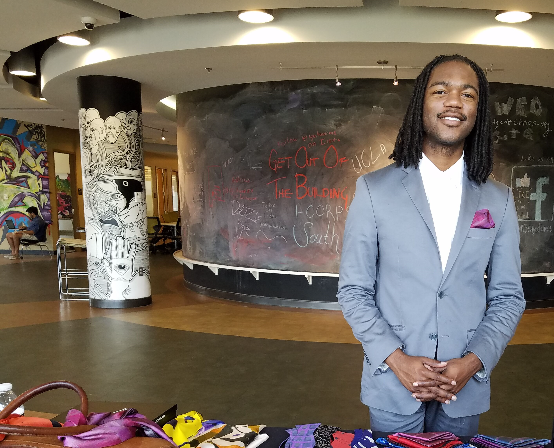 Cedric Brown remembers helping his mother match her outfits as a kid. He also remembers painting on pieces of paper. Now, at age 25, Brown has combined his two passions—fashion and art—and created the Cedric Brown Collection (CBC), a line of neckties, bow ties, handkerchiefs, and scarves.

Brown, an Atlanta native, recently came to Birmingham for a pop-up shop at the University of Alabama at Birmingham’s Edge of Chaos, a project of the School of Public Health that brings together academia, business, and the community to find real and workable solutions to complex problems.

David Hooks, Director of Innovation at the Edge of Chaos, said Brown was invited to the city to provide insight on being a start-up business.

“Young African-American entrepreneur starting up his business in Atlanta . . . we wanted to get his feel on what that was like,” Hooks said.

Brown, a graduate of Savannah College of Art and Design (SCAD), said his slogan is ‘From evening to street wear, CBC makes a chic statement.”

While attending SCAD, he worked with high-end fashion retailers and designers through internships and classes. His fashion professors advised him to incorporate his painting background into his apparel designs. In his Senior Collection, Brown produced hand-painted and hand-dyed designs that received glowing reviews from his instructors and peers.

“I experimented with hand-painting scarves while at SCAD,” he said. “I also interned in New York with Wes Gordon, a designer who does New York Fashion Week, and he gave me some valuable advice: … ‘Start with one item and then expand into others.’”

Brown took Gordon’s advice and began with scarves. Why scarves?

“You can easily put your artwork on scarves, and people will always be able to see it,” he said.

Just before the 2008 Olympics in Beijing, China, Brown, then a high school student, was selected as one of seven Boys and Girls Club members to have his designs featured in “Peace, Friendship, Goodwill through the Olympic Spirit,” a children’s artwork collection.

“At 15 years old, I traveled to Beijing, China. It was my first international trip, plane ride, and worldwide art show. … I went on a two-week excursion around China. This experience was life-changing. It made me feel like the sky was the limit and there was nothing I could not do,” he told True Urban Culture (TUC) magazine.

“[People in that part of the world] really know how to dress,” he said. “I was in … awe. They had every high-end brand you could think of. Looking at their clothes for inspiration was awesome.”

As a black man in China, Brown had a unique experience.

“I was treated like a celebrity,” he said. “People were lining up to take pictures with me. They were touching my hair, taking videos of me. One lady even asked if I was from Harlem, but she was thinking about the Harlem Renaissance period. It was crazy.”

Brown’s artwork has been featured on Atlanta billboards and magazines, such as Jezebel and Sheen. In 2010, he was also selected to create a piece of artwork for International Paint Pals, a nonprofit group that displays children’s artwork all over the world. His piece, “As the Twig Bends, so the Tree Inclines,” was accepted into the National Russian Museum in St. Petersburg, Russia, and he received a letter about his artwork from then Consulate General Sheila Gwaltney.

Several well-known celebrities have embraced Brown’s designs. Rapper Young Thug, who is known to be fashion-forward, has worn CBC scarves and handkerchiefs on multiple occasions, as have comedian Joe Torry and Atlanta news anchor Deborah Tuff.

Brown said he doesn’t have a target audience: “I’ve seen middle schoolers to 70-year-olds wearing my stuff. That’s a great thing, though.”

Brown’s collection can be found in boutiques throughout the state of Georgia, and he hopes to be able to move into apparel, both men and women’s wear.

Being a young black man with his own business, specifically as a designer, can be a challenge, he said.

“Being an artist is a big risk,” Brown said. “You get so many no’s, have so many people who doubt, but you see the growth. It’s great seeing people wear my stuff. When I created this I had a vision, but when I see people take my stuff and put their own style and spin on it, that’s really big.”