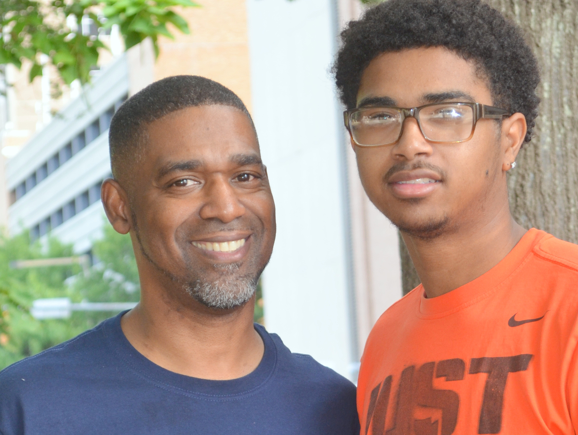 Gideon Waithera was the first to finish Birmingham’s inaugural I Am A Father 5K Saturday at historic Kelly Ingram Park. But while he was proud of his 17:20 time, there’s something else that makes happier – being a father.

“One of the greatest privileges of my life is being a father,” Waithera said, with sweat pouring down his face. “It’s a blessing. It’s an honor to run here today, because I am cognitive of the fact that I am a father.”

Waithera, a 37-year-old native of Kenya who now lives in Bessemer, was among about 200 people running and walking through downtown Birmingham on Saturday. He has two children – a nine-year-old son and a seven-year-old daughter.

Waithera says he’s working on reducing his timing in the 5K. But while he enjoys running, his children are his joy.

The huge banner hanging across the start/finish line sums it all up – “Strengthening Families One Mile at a Time.”

Birmingham Parks and Recreation Director Kevin Moore made the run a family affair. He and his daughter, 17-year-old Taylor, started the race together.  Taylor was among first finishers in the race. Her dad came in a few minutes later.

“I was trying to keep up with Taylor. I came in at about 29:15,” Moore said. “When I heard about the run, I wanted to do it and include my daughter. And it’s a purpose I believe in.

Ty Story, a Birmingham native who now makes his home in Atlanta, finished second in the race. He didn’t run the race with his daughter, but she’s one of the reasons he runs and stays in shape.

“I have to run to keep up with my six year old,” he said.

Story grew up in Zion City, and says, “I believe in family, and I love being a father.”

Cathy Jones and about a dozen friends got together for the event to celebrate the fathers in their lives.

“I have a good father and I thank God for him,” Jones said.  She describes her father, the Rev. Willie Jones as someone you can count on to be there.

“He’s a pastor, but he’s funny. He’s God-fearing and he is always there to listen,” she said. “He makes time for us.”

He’s over 70 and still preaches, she said.

David Manuel said he was inspired to start the walk about three years ago, after going through a life-threatening illness.

“I was in ICU for 40 days,” he said. “My body had begun to shut down, preparing to die.” His liver had failed him and his other organs also were failing.

“I had never been sick. I went to the doctor because my urine was looking like Coca Cola,” he said.

“Somebody gave me the gift of life. I’m going to always work to help others,” said Manuel who grew up in Southwest Birmingham and is an administrator with Dekalb County Georgia Parks and Recreation.

“God gave me a new assignment, and I embraced it,” he said.

In addition to raising awareness on fatherhood, Manuel also uses the run to stress the importance of organ donation and to benefit community organizations.

The Maranathan Academy, a school serving critically at-risk youths, will benefit from Birmingham’s run. Manuel said the school serves many youths who have had hard times, partly because of the absence of fathers or positive role models.

The goal of this run is to strengthen families, Manuel said. “That’s how we can make a difference.”

His wife, Karren, serves as director of the run and handles a lot of the coordination.

“It’s all about engaging fathers,” she said. “We know the outcome when there is an absence of fathers.”

Manuel has written a book entitled “I Am A Father.” He started the I Am A Father run first in Atlanta, where he said participation grew from 80 in 2015 to about 800 last year. The Atlanta event is scheduled for June 17, and he is expecting an even bigger crowd.

In Birmingham, the first race started with 200 participants and strong community support. He’s looking to return next year.