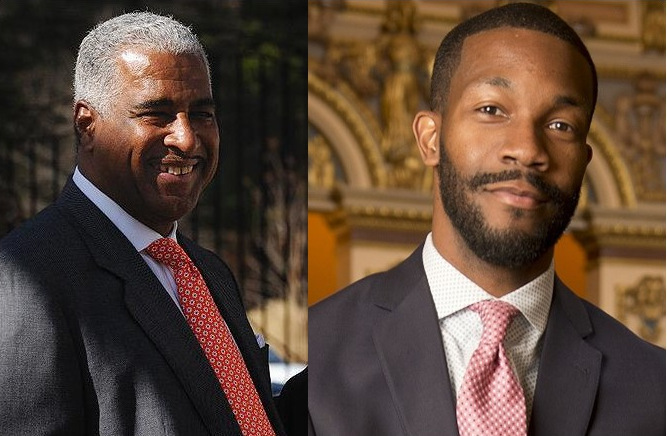 Birmingham voters on Tuesday sent a signal that while they want to keep most of the city council members who currently occupy seats behind the dais, they’re less sure about the council president or the mayor.

Incumbent Mayor William A. Bell could not claim victory after a race in which he faced 11 challengers but was widely expected to win without a runoff. Instead, the aftermath of the election finds Bell trailing Randall Woodfin, an outgoing member of the Birmingham Board of Education who defied expectations to gain more than 1,000 more votes than the mayor, and almost 9,000 more than third place finisher Chris Woods, who some pundits – but not all — expected before the election to be the man most likely to give Bell a challenge.

“I had predicted that Mayor Bell and Randall Woodfin would be in a runoff,” said state Rep. Merika Coleman, who also is an assistant professor of political science at Miles College in Fairfield. “But I had assumed that Mayor Bell would be at the top as it relates to numbers going into the runoff. So, it was a little bit of a shocker. But in hindsight, Randall Woodfin really energized the young voters.”

With Woods out of the race, the Oct. 3 runoff lines up as a showdown between veteran campaigner Bell, who has served in city government for most of the past 38 years, and Woodfin, the final representative of a group of contenders who preached that Birmingham needed a change at the top.

Council President Johnathan Austin now faces an Oct. 3 runoff against challenger Darrell O’Quinn. Austin, with 31.50 percent of the vote, was about 250 votes ahead of O’Quinn, who had 25.68 percent with 95 percent of the precincts reporting.

But the outcome of the mayor’s race and that of the city council president may not be that closely connected – depending on who you ask. While some political observers believe voters may have wanted to elect a mayor who could work harmoniously with the council – and Bell and Austin frequently clashed — other factors, including a dislike of “professional” incumbent politicians, negative events close to the election, and name recognition of already-serving councilors may have determined which city leaders won their races Tuesday night and which still have a fight on their hands.

Still, the factor that many experts cite as crucial to the outcome of Tuesday night’s election was low voter turnout. The small number of registered voters who actually voted – about 27 percent – overcame the lead Bell appeared to have earlier.

For instance, a WBRC FOX6 poll published Aug. 1 showed Bell with a commanding lead – 54 percent, versus Woods 17 percent and Woodfin’s 14. Birmingham-Southern College political science professor Dr. Natalie Davis, who conducted the poll, said the actual results of the Aug. 22 election are not that surprising.

“I think the overall bottom line is turnout is everything,” said Davis. “And in elections like this, and I have polled many of them, 3 or 4 weeks out from an election the incumbent always leads big time. And then when you get to the day or two before the election things change. And that’s because in a low turnout election only those who are the most passionate come out to vote. And clearly, Woodfin had mobilized his voters. They had a reason to vote. Either it was about change or dissatisfaction with the current mayor.”

Woodfin also “was getting a good slice of the white vote. And when you look at the city of Birmingham, the area that’s in Forest Park, Redmont, even Glen Iris area is much more ‘high turnout’ than the rest of the city.  So, he could capitalize on that vote, and he did,” Davis said.

Turnout mattered “both in the sense of low turnout but also in the sense of who turned out,” said University of Alabama political science professor Dr. Allen Linken. “In looking at the numbers and comparing it to the 2013 Birmingham mayoral [race] more people came out, which is good. It was about 27 percent in 2017, about 21 percent in 2013, about 38,000 this year, about 27,000 four years ago. So, more people came out. Problematically, it’s tough to draw a lot of analysis on the sentiments of the community, the sentiments of the city when about one in four vote.”

Linken said he expects turnout will be a factor going into the runoff. “A lot of it for the next five to six weeks is going to be who can keep their base and who can mobilize on Oct. 3… Anyone who can mobilize 5 percent of the votes not cast in this election has a great chance of winning,” he said. “So, if you can grab Mr. Woods’ vote, if you can grab an endorsement, you could reach out to another community or a community that was underrepresented in this election you have a great chance of winning on Oct. 3.”

The question arises about whether the voters who supported losing candidates will turn their ballots to Bell or Woodfin. Although it’s not clear how many of those voters will actually participate in the runoff, Davis said she expects some of Bell’s former opponents might support the remaining challenger, Woodfin.

“You would expect people who voted for Woods might very well vote for Woodfin,” Davis said. “I went to one debate, and saw them sort of playing off of each other – ‘Well, I really agree with what Randall just said,’ that sort of thing. ‘Randall makes a good point.’ And given the acrimony between the mayor and Chris Woods, I assume that Woods is not going to be endorsing Mayor Bell.”

The negative tone surrounding aspects of the campaign and the campaigners made some difference in the outcome of the Aug. 22 election, experts said.

“I went to one debate and what I saw was a lot of folks hammering at the acrimony between the city council and the mayor,” Davis said. “And I think that played out in this as well, because Woodfin was saying, as critical as he was of Mayor Bell, ‘you simply have to have cooperation’ and I think that was a selling point.”

Miles College political science professor Alan Tharp agreed that the frequent public discord between the mayor and the council president contributed to how voters viewed Bell and Austin on Tuesday night.

“Those were the two that fought publicly the most… I think a lot of people saw that as personal aggrandizement and blamed both of them and both of them didn’t do well,” Tharp said. “They were the face of the city not being able to do anything, in people’s minds.”

“There was a lot of negativity there. You heard a lot of negative ads across the board,” Coleman said. “Oftentimes negative ads make people stay at home. … There were negative ads that were shot between Mayor William Bell and the third runner up, Chris Woods. So, you saw each one of those campaigns attacking each other. Nobody attacked Randall Woodfin at all in that race. You didn’t hear a radio ad, you didn’t see a television ad that attacked Randall Woodfin,” Coleman said.

And although Woodfin leveled various complaints against Bell in his ads, Coleman described Woodfin’s marketing as basically “positive. They were about why you should vote for him. So, it’s interesting to see the two campaigns that duked it out, actually ended up coming second and third place. But the candidate that ran the positive campaign was the top vote getter…. I think in this situation, both William Bell’s and Chris Woods’ campaigns counted Randall Woodfin out. Therefore, he was able to run a positive campaign.”

While there were other factors cited, one big issue seems to be that voters nationwide are demonstrating that they want new faces in office. That may have influenced both the mayor’s race and that of Austin, Linken said. “There is a distaste for professional politicians, a distaste for politics as usual and I think we saw that with the election of President Trump,” he said. “I think we’re seeing that with Tea Party for the last four or 8 years being elected… One of the sentiments that could be out there is a distaste for professional politicians which may translate to the incumbent mayor having an issue, which may translate to the incumbent city council president having an issue … with winning this election.”

Voters may be reacting to the long period of time Bell has been in city hall, Davis said. “Woodfin, for most voters citywide, is a new face and this notion of change is important….  William Bell’s been on the ballot since 1979 when he was elected to the city council,” she said, adding that voters likely believe that “the relationship between the mayor and city council is not going to change if William Bell is mayor.”

Coleman quoted an unidentified council member who said that Bell’s showing in the election could also be attributed to the fact that he has people in his office and his campaign contributing to a negative viewpoint about his work and his reelection. “He’s got to make some shakeups in his campaign and he’s got to make some shake-ups in city hall if he’s reelected,” she said.

Candidates who hope to win will have to mobilize new voters while keeping their base of support, Davis said. “Will William Bell be sufficiently nervous to really work hard on getting his vote out in a way that maybe he didn’t get done as well this time? Or will he still have a kind of lackluster performance?”

Coleman who noted that Woodfin’s campaign made good use of social media to get young people out in relatively substantial numbers, said Bell will have to do the same if he wants to win. “It will be up to William Bell at this point to galvanize the voters of all the rest of the candidates. That’s the way he wins, is to galvanize those folks. It’s going to be an uphill battle for the mayor,” she said.

On the other hand, she said, the runoff is like a new election, so anything can happen. “You’ve got six weeks to meet new voters, to convince folks, to tell the story,” she said.

Part of that story, she said, will be the mayor’s need to overcome the complaints that he spends more time, effort and money on downtown at the expense of the rest of the city’s 99 neighborhoods. “He also has to be able to show the connection between the economic development that’s been going on in the city of Birmingham with the community development that’s going on,” Coleman said. “That’s the rub. People have said they’ve seen a lot going on downtown Birmingham and not enough going on in the neighborhoods… You have to have both.” 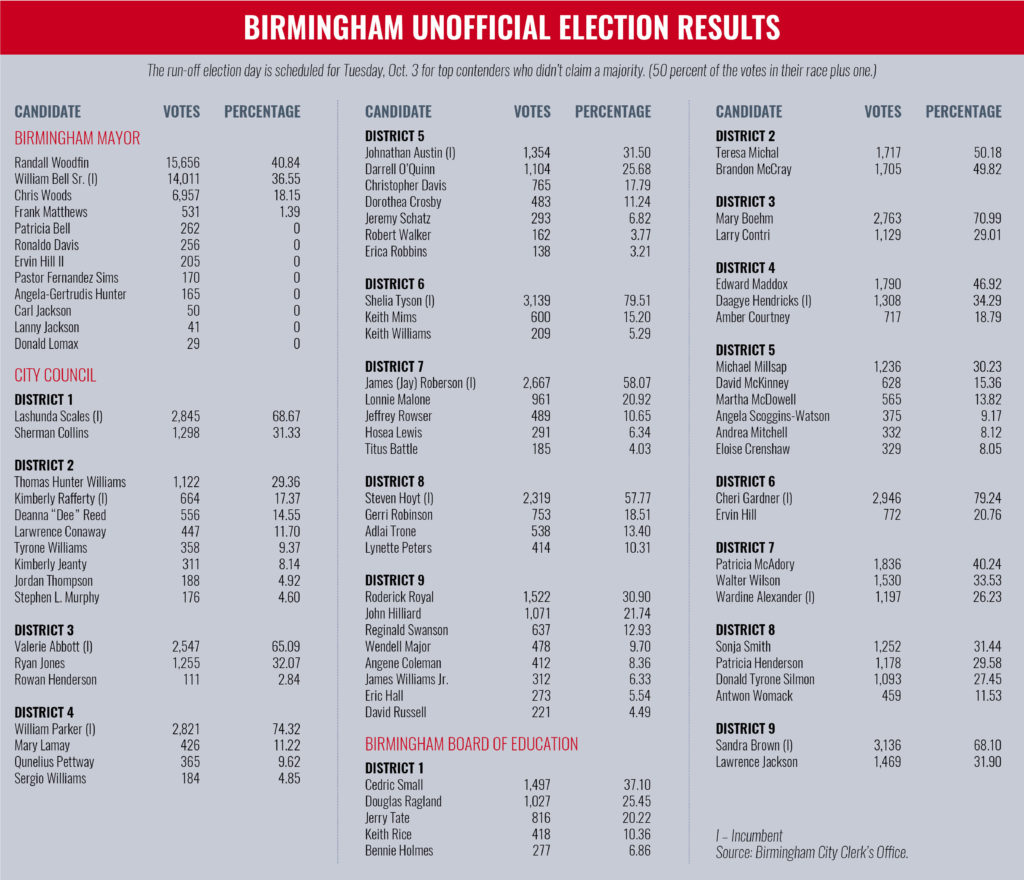