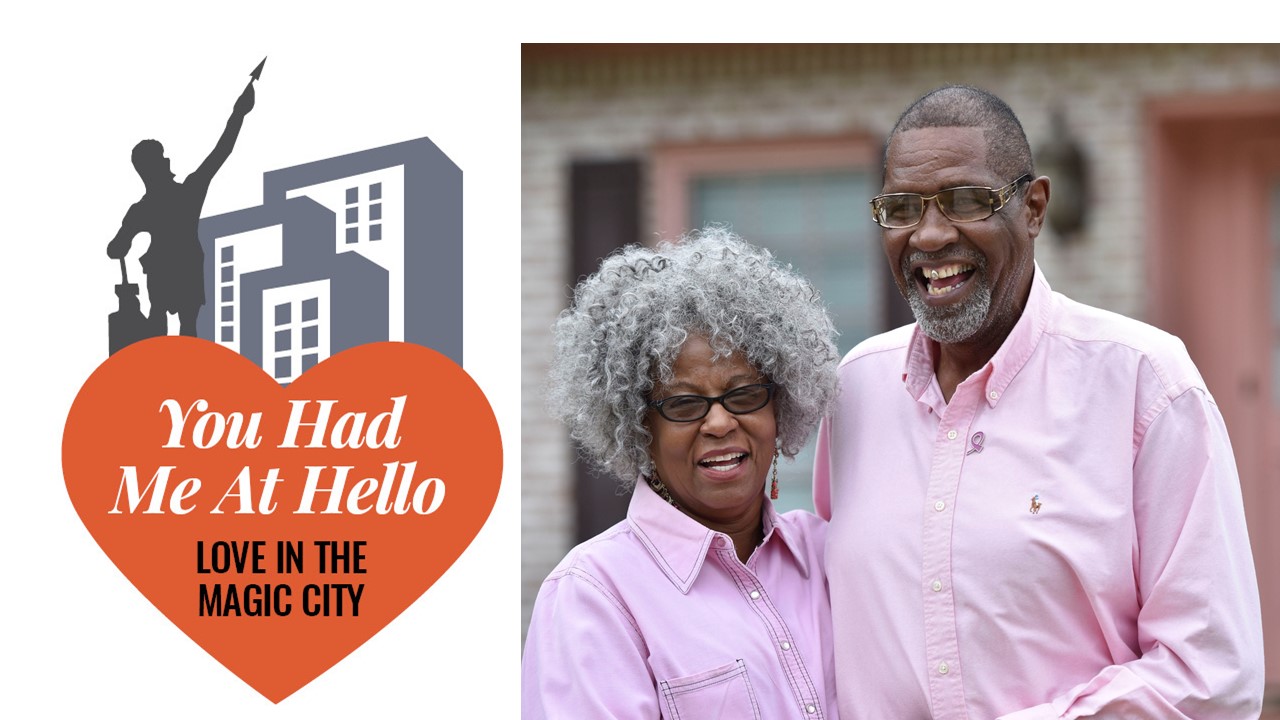 “You Had Me at Hello’’ highlights married couples and the love that binds them. In honor of October being Breast Cancer Awareness Month, we take a look at a Birmingham breast cancer survivor and her 45-year marriage to a man she’s had a crush on since middle school.

If you would like to be considered for a future profile, please send emails to chandatemple@gmail.com. Please include the couple’s name, contact number(s) and what makes their love story unique.

Met: When Janice was in middle school, she had a crush on Gregory, the star of the basketball team. Gregory was two grades ahead of Janice and did not know her nor did he know she had a crush on him. But fate would bring them face to face during Janice’s senior year at Birmingham’s Wenonah High School.

In July 1971, Janice was at home recuperating from a car accident. Her cousin dropped by to get some of her mother’s homemade gingerbread. The cousin, unaware of how Janice felt about Gregory, brought Gregory with him. Janice was not up to the surprise visit because she had scratches on her face and had lost her bottom teeth in the accident. Gregory didn’t seem to be bothered by her appearance, making her laugh and telling her not to cover her mouth when she smiled. They had a nice visit and parted ways that day.

The next time Janice and Gregory connected was fall 1971 when he noticed her at a Wenonah High School football game. Janice’s teeth were fixed, and she was wearing a pink and white hot pants outfit. “She looked totally different,’’ Gregory recalled. A fight broke out at the game, and Gregory grabbed Janice’s hand as they ran to safety. He drove her home, where Janice called her mother to let her know what had happened at the game. Gregory seized that opportunity to ask Janice’s mother if he could take Janice to a movie. The next week, Gregory and Janice saw the movie, “Shaft.’’

Both were dating other people, so they became friends. In December 1971, they started dating.

The wedding day: Janice’s father and Gregory’s mother were against the June 1972 wedding, saying the couple had only dated for six months. Janice’s father even told Janice it wouldn’t last. “I said, ‘Daddy, I don’t know about that, but I do know I love him,’ ‘’ she said. Gregory even said that he thought God put Janice in his life because he has never been able to talk to someone the way he could talk to Janice. They laughed and talked about everything. “I married my best friend,’’ Janice said.

Fighting breast cancer: Janice was 28 when she was diagnosed with breast cancer in 1982. She had a mastectomy, their son was 3 years old, and Gregory stayed by Janice’s side. “While I was in the hospital, the nurse told me my husband might leave me because of the breast cancer. Gregory overheard her and said, ‘I didn’t marry her body. I married her personality. This is my wife!’’’ Janice said.

Gregory then told the nurse to get out. He was committed to staying with Janice through thick and thin.

After Janice left the hospital, Gregory bathed and fed her. He made her exercise her arm and combed her hair. Such actions, made Janice’s father cry. “He said, ‘This boy loves you more than I love your mama,’ ’’ Janice said.

Health challenge No. 2: In 1987, Gregory fell from the top of a building while working at American Cast Iron Pipe Co. A crushed ankle and shattered lower leg left him in a wheelchair and unable to walk for three years. Janice worked extra hours at the bank to help the family. Gregory regained his ability to walk, and their love grew even stronger. In 2005, they celebrated their 33rd wedding anniversary with a formal wedding to renew their vows. (Their first wedding was small and held at Gregory’s sister’s house.)

Health challenge No. 3: During the summer of 2016, Gregory was diagnosed with prostate cancer. He underwent radiation treatments in October 2016 and completed his last round in December 2016. With all of the health issues the couple has faced, many ask how do they keep going. For Gregory, it’s simple: “I didn’t worry about it. Most stuff will kill you if you worry about it. You have to have humor while being treated.’’

Happily ever after: Today, Gregory is retired from ACIPCO and makes sweet potato pies for his family during the holidays. Janice works as a processor at a Birmingham bank. She enjoys baking. They have one son, four grandchildren and have served as foster parents to at least 20 children. “I feel like we were meant to be,’’ Janice said. “We are so comfortable with each other. We are honest. God gave me the perfect match.’’